Reader Success Story: A Once in a Lifetime Adventure to Australia
Team Piece: How We Would Use 100k United Miles
How I Visited Two Extra Countries at No Extra Cost 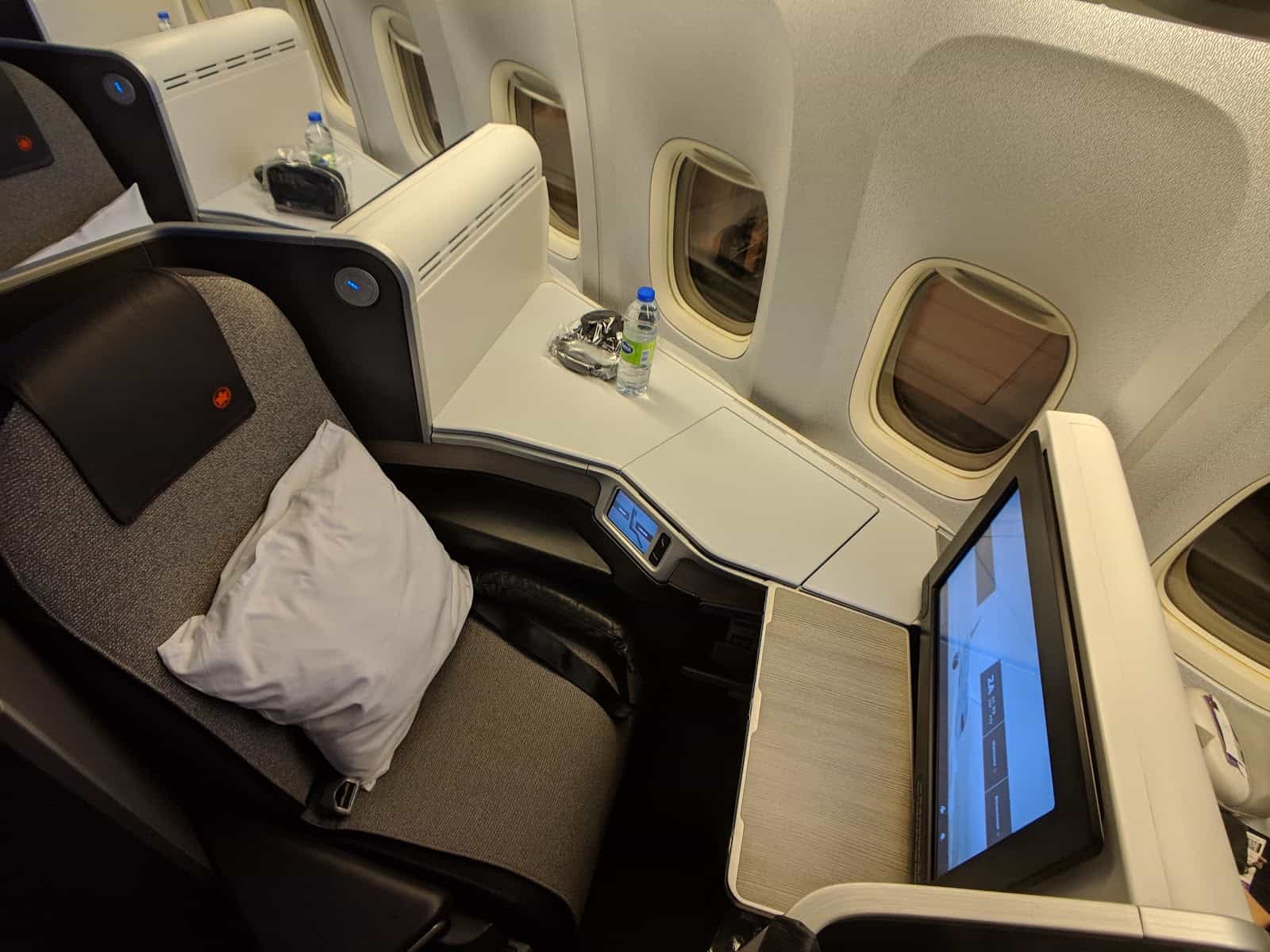 In the points and miles world, we’re always saying that points and miles aren’t for you if you only want to travel to or from Australia in business class around Christmas or New Year’s. These awards are highly coveted, and therefore, almost impossible to book. And it’s even tougher if you’re traveling with more than one person.

Last year, I was in Australia in December visiting a friend and scuba diving, but I wanted to go home to Michigan to spend Christmas with my family. I was pretty much resigned to paying $1,000 for a one-way economy ticket, and I wasn’t excited about it, to say the least.

Even though I was pretty sure that’s how it would play out, I still regularly checked award availability “just in case”. I figured I had until mid-September or so to consider my options before pulling the trigger on a cash ticket in coach.

Well, having faith paid off and I got so lucky! I found two seats in business class that I was able to book for 90,000 United miles plus around $100 in taxes and fees per ticket.

Make sure you check out some of our favorite ways to book flights to Australia. 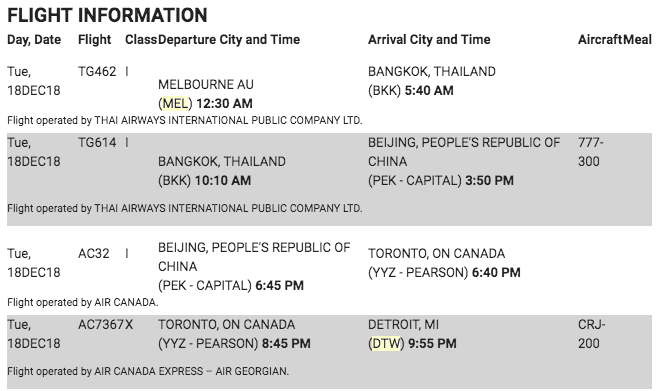 Now, flights from Australia are never short, but I definitely took the long way. I flew from Melbourne, Australia to Bangkok, Thailand, to Beijing, China, to Toronto, Canada, and finally home to Detroit, Michigan. 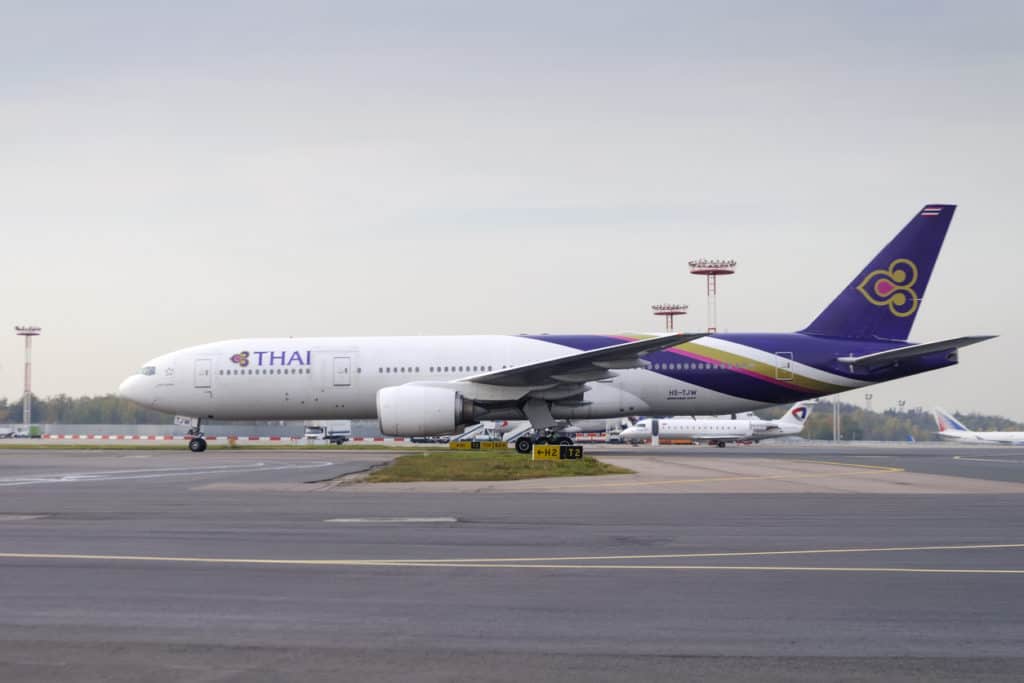 Altogether, it was around 40 hours of travel, including the time it took to get to the airport and home from the airport. I honestly couldn’t imagine doing that in economy, because even in business class, it was rough! That said, the paid economy tickets had a slightly more direct routing.

Overall, even though it was long, it was a pretty fun set of flights. Let me tell you a little more about each one!

I was probably the most excited for this flight because I had flown Thai Airways First Class before, and loved it, but it was my first time trying Thai’s business class. It was also my first time flying an Airbus A350 which was the most exciting part of all of the flights on the trip home! 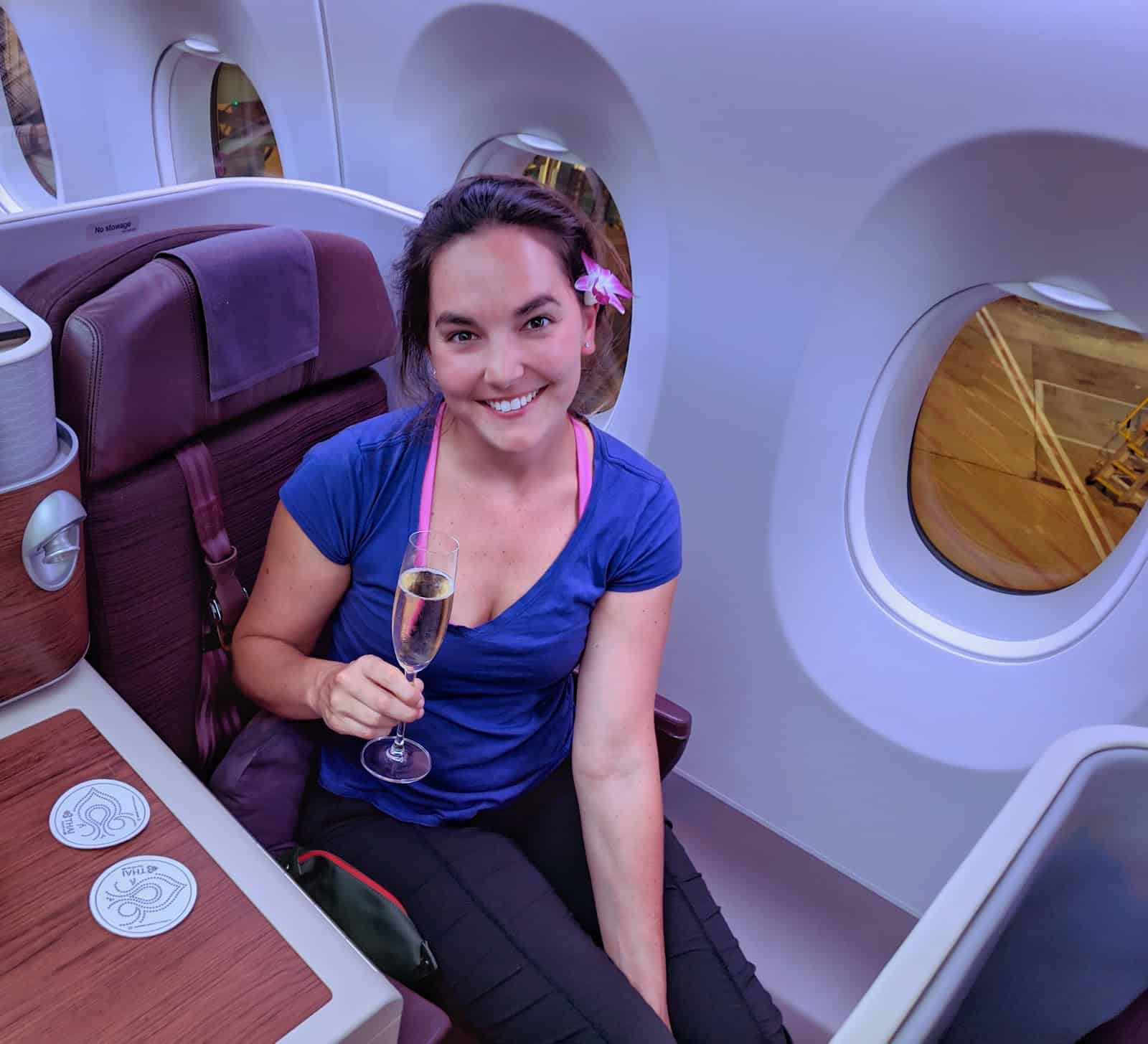 I love the interior of Thai’s planes because purple is my favorite color. Since this flight was overnight and I still had another flight on Thai Airways coming up, I took the opportunity to sleep (and so did Brendan). 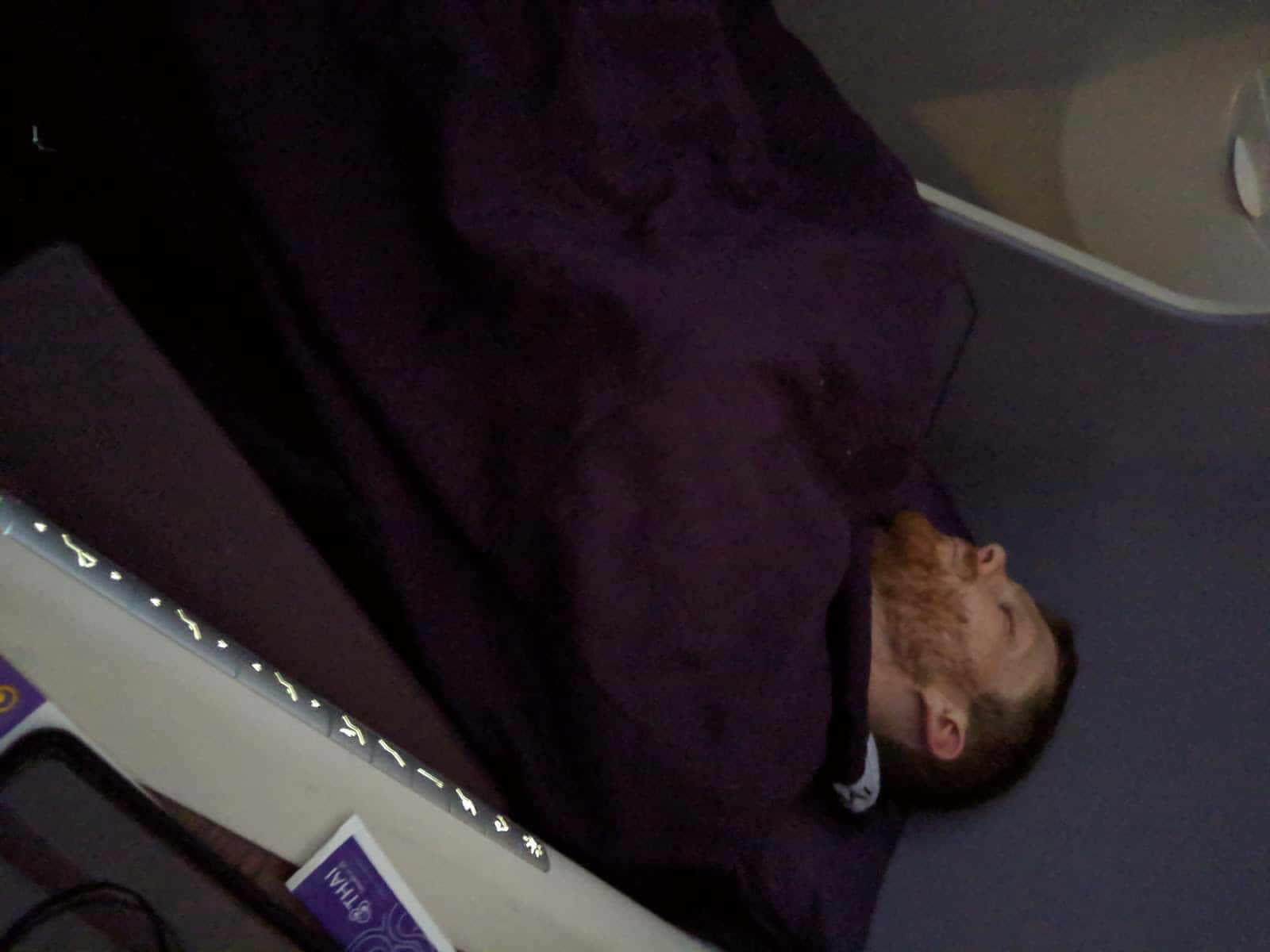 One great thing about flying Thai Airways in business or first class is that you can get a complimentary massage in their Bangkok lounge during your layover, so I was feeling nice and relaxed by the time I boarded my second flight.

This flight was also on Thai Airways in business class on the A350. However, it was during the day after a decent night of sleep, so I was excited to try more of the food and enjoy the plane while being a bit more awake! 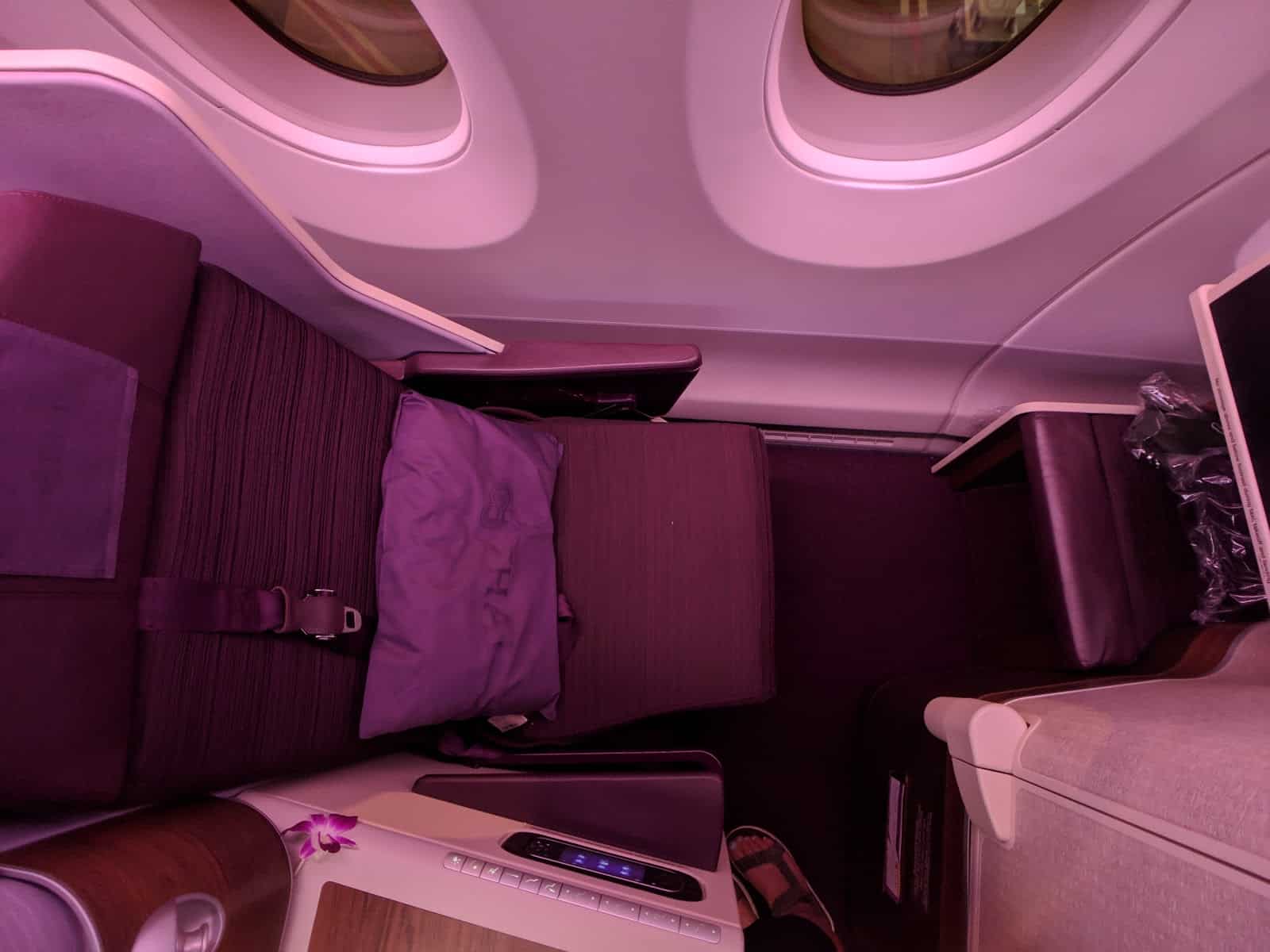 I found the food on the flight to be very good, although I expected as much after my experience flying Thai in the past. I also had eaten a fair bit in the lounge in case the food wasn’t to my liking on the flight. 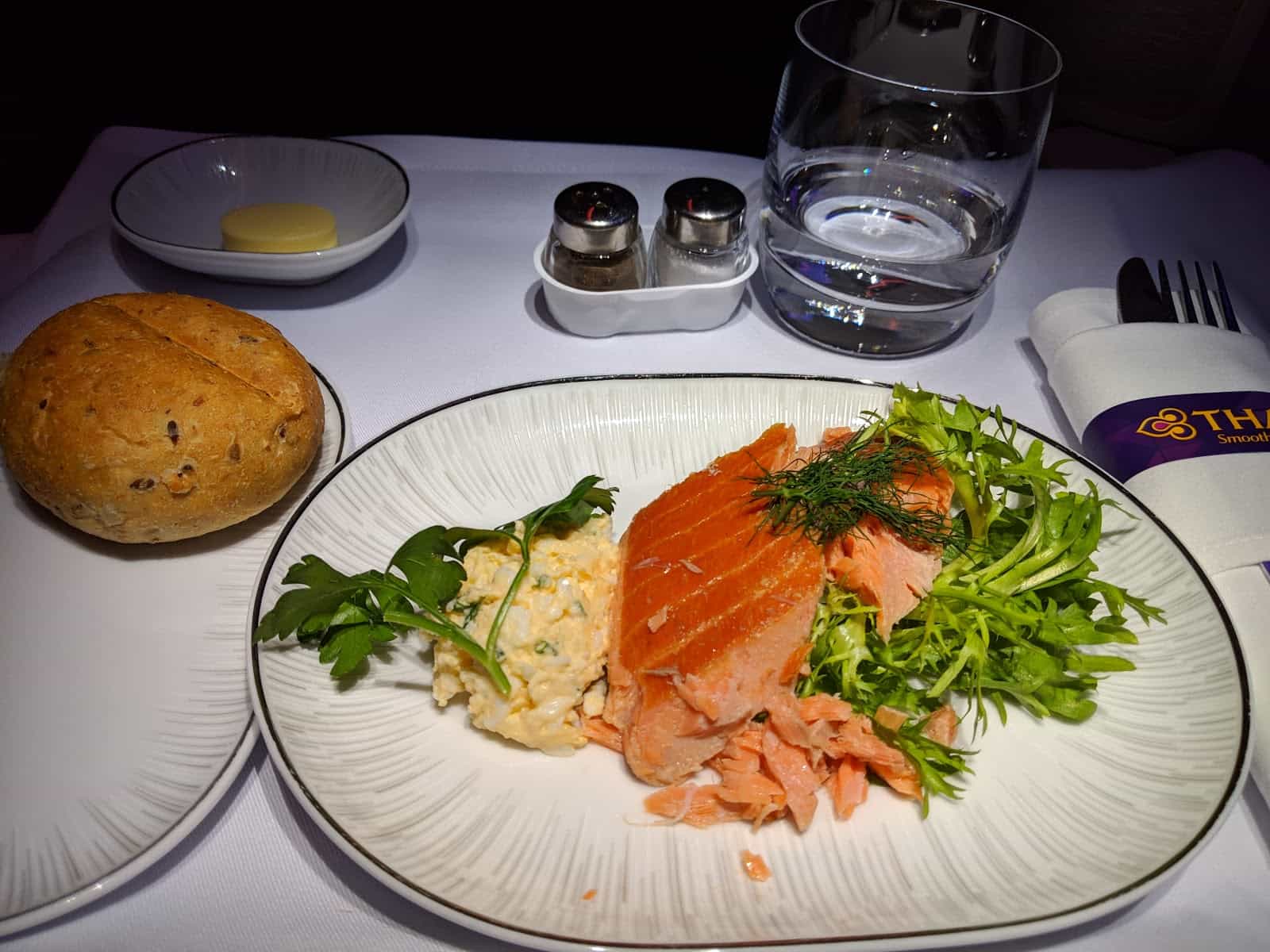 I love daytime flights in business class because it gives me a comfortable place to read a good book and catch up on some Netflix shows. I usually have the idea of getting work done, but I often don’t end up being that productive on flights.

Who can when you’re being pampered?!

I was also really looking forward to my Beijing to Toronto flight on Air Canada in business class. I’d never flown Air Canada’s business class before and was very impressed with how comfortable the seats were! Since this was almost a 12-hour flight, I had enough time to get a full night of sleep and enjoy the seat while I was awake.

My absolute favorite part about the seat was that you could adjust how firm/soft it was! I found this incredibly helpful for getting comfortable while sleeping, and it’s not something that I’ve seen with other airlines do with their business class seats. 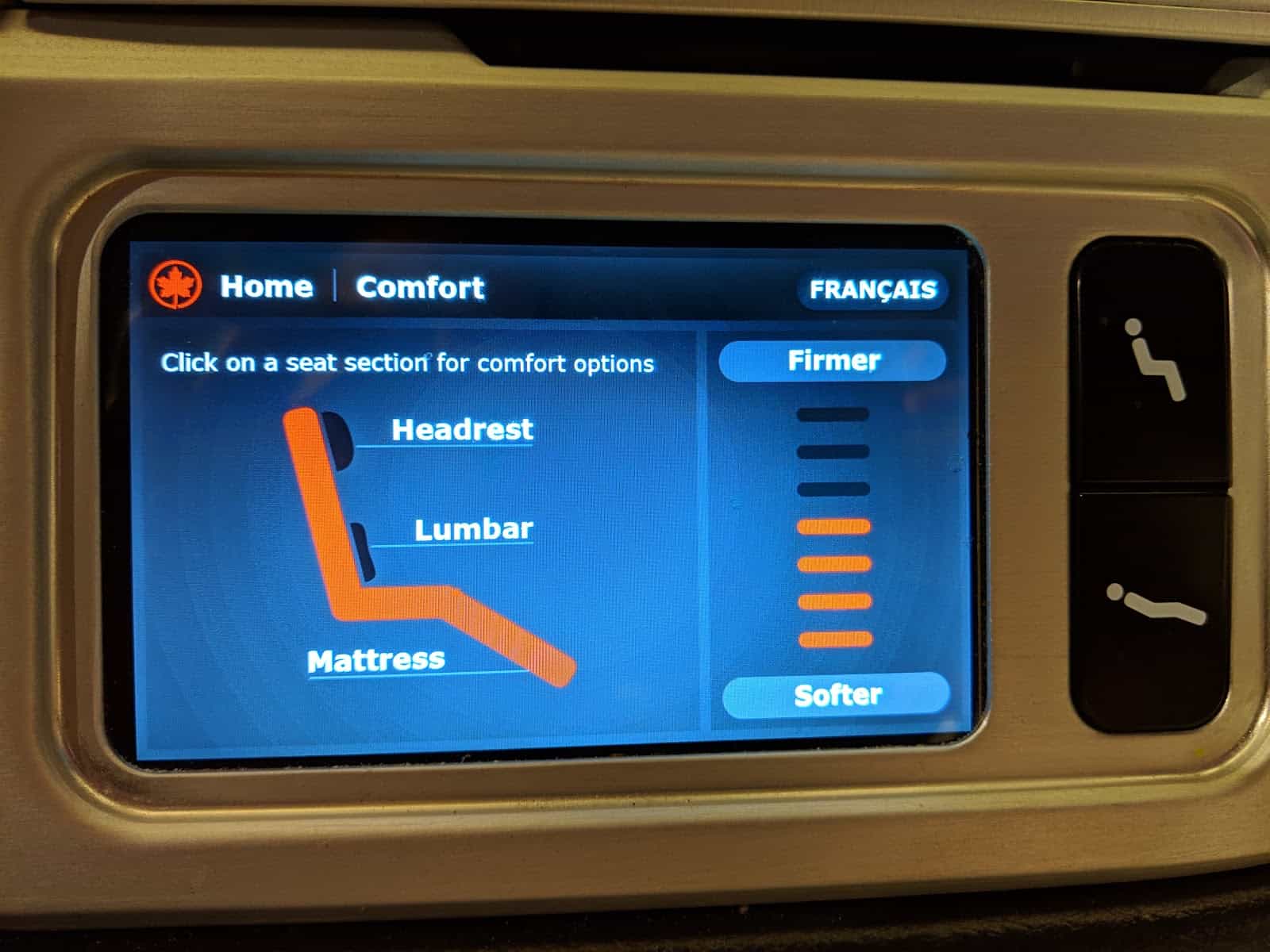 Overall, I thought the food wasn’t quite as good as on the Thai Airways flight, but it was still very much worth eating. 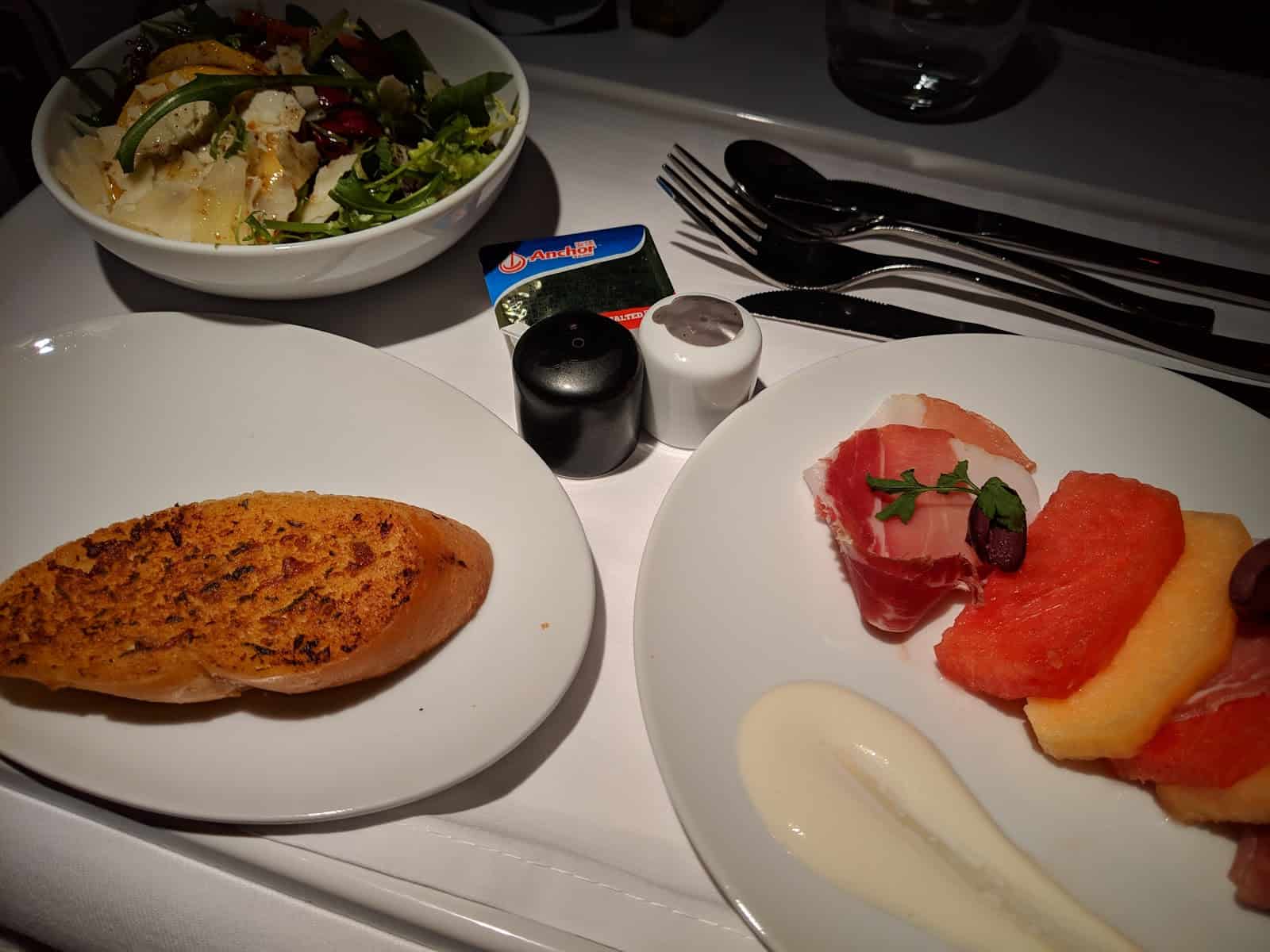 Okay, the last flight was actually in economy but it was a short flight and there’s really not much to write home about. Other than that, we actually made the flight.

You see, in Toronto, there is US Customs and Immigration Pre-Clearance, which means you go through customs and immigration before your flight to the US. We had checked bags, and you have to wait until your checked bags clear the system before you can go through. Of our three bags (thanks, diving gear), one of them was holding us up and almost caused us to miss our flight! Had we missed our flight, we would have had to spend the night in Toronto and take the first flight the next morning.

Luckily, our bag was cleared at the last minute and we were able to run and still make our flight. Unfortunately, our bag did not make the flight, but I had booked the itinerary with my Citi Prestige. At the time, the Citi Prestige Card offered trip and baggage delay insurance, but as of September 22, 2019, that will no longer be the case. Going forward, I’ll always book flights with my Chase Sapphire Reserve so that I can have trip and baggage delay insurance.

Tips If You Want to Redeem Miles to Australia

If you want to redeem miles to fly to Australia, especially in a premium cabin, my main advice is to look early, look often, and be flexible. The more flexible you can be, the better your chances are of finding an award ticket that will work for you.

Was It Worth It?

For me, it was definitely worth spending 90,000 United miles for this itinerary. No matter how I was going to fly home from Australia, it was going to take a long time and I didn’t want to arrive home to spend time with my family completely exhausted from travel.

If a trip to Australia is on your bucket list, using miles is a great way to get there, especially if you want to fly in business or first class. If that sounds like you, be prepared to spend some time looking for award availability and consider being flexible with your plans so you can take advantage of award space.

And when you travel, enjoy it! 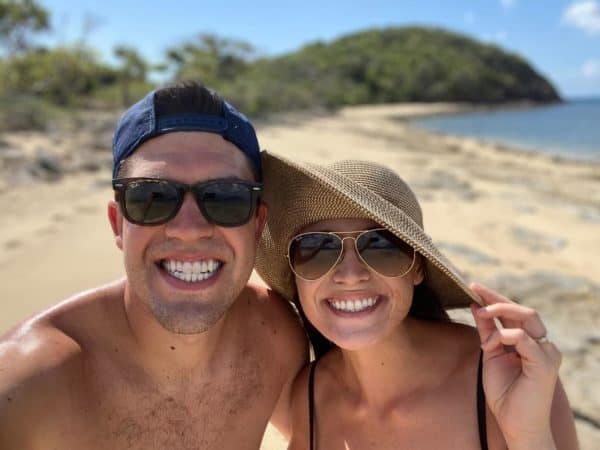 Team Piece: How We Would Use 100k United Miles 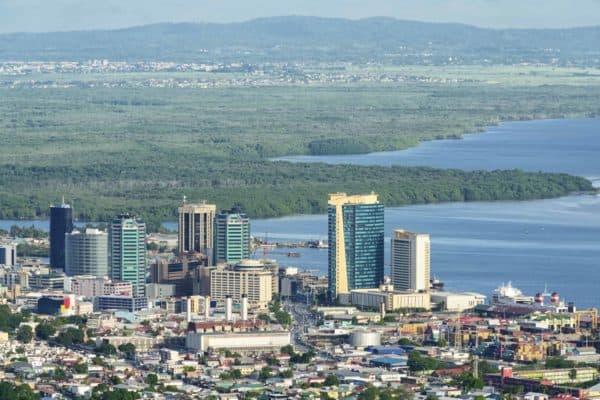 How I Visited Two Extra Countries at No Extra Cost