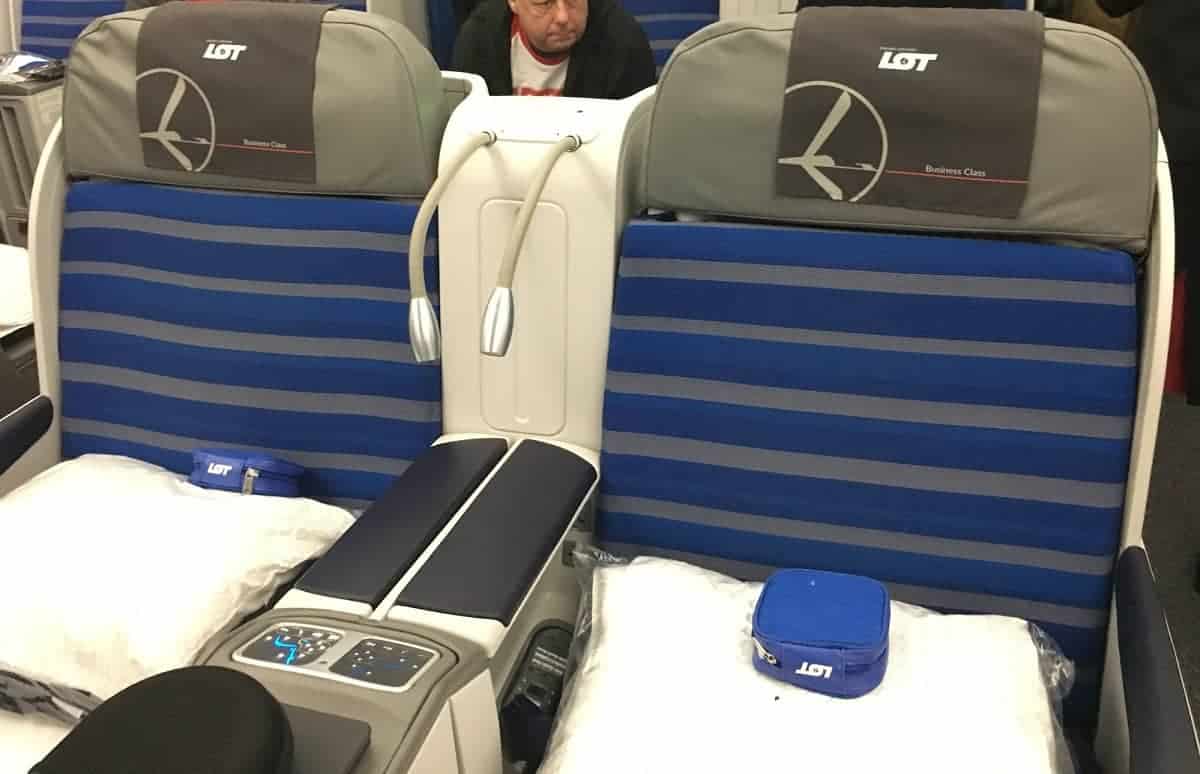 LOT Polish Airlines doesn’t get enough attention as a valuable Star Alliance Partner. Poland’s flag carrier, and one of the world’s oldest airlines, flies to Warsaw out of several major international U.S. gateways:

LOT recently introduced a nonstop flight from New York JFK to Budapest, Hungary. There aren’t a lot of nonstop routes to Budapest, and the only other way to fly to Budapest non-stop is on American Airlines out of Chicago (ORD) or Philadelphia (PHL).

Both Warsaw and Budapest are great gateway cities to central and eastern Europe. These regions are experiencing a renaissance and are rich in history and culture. The region is still very affordable and sees far fewer tourists than Western Europe.

However, LOT flies beyond Warsaw and Budapest. You can connect to many countries in Europe, Israel, Turkey, Egypt  and beyond. LOT flies to some hard to reach destinations, such as Armenia, the Republic of Georgia and Albania. 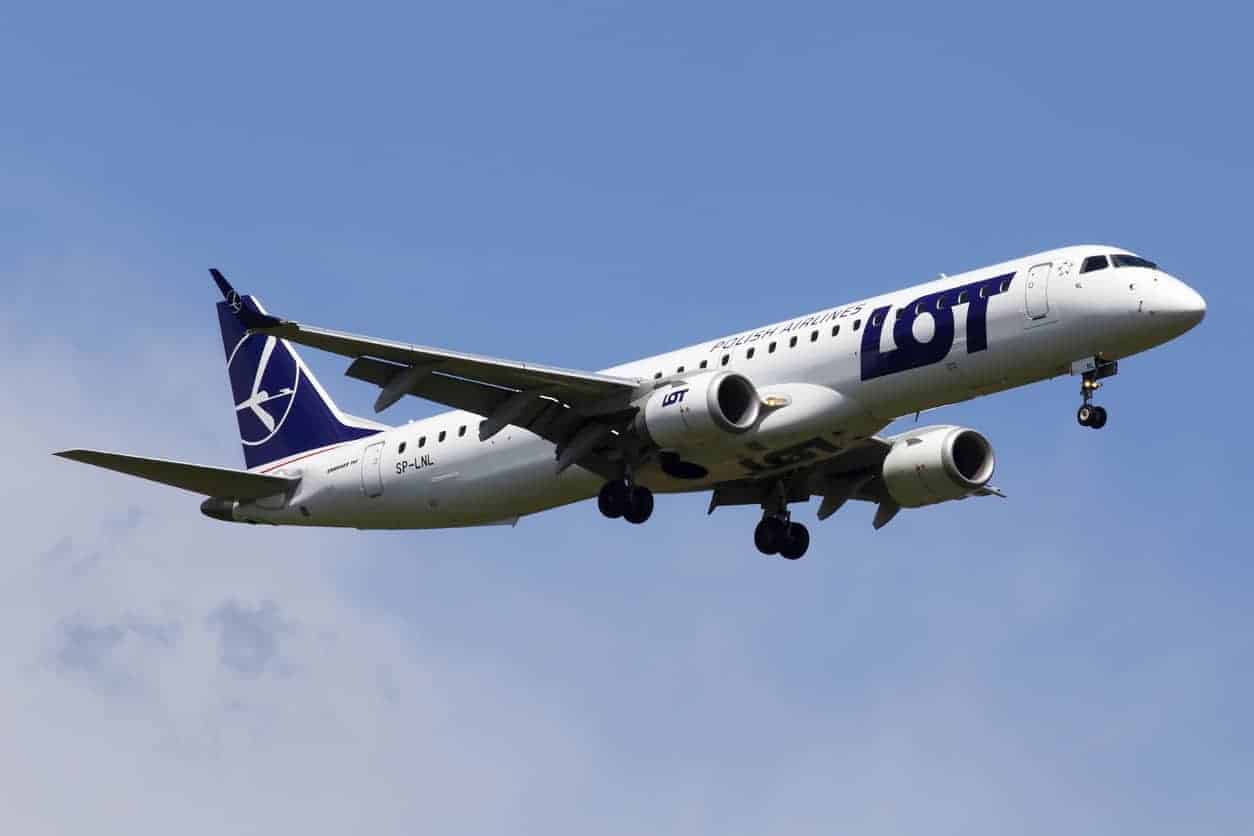 How I Booked LOT Polish Airlines

Before this trip, I’d never flown on LOT. It was the first Star Alliance carrier I’d flown on my around the world trip that I booked with ANA miles. Isn’t it amazing that you can use miles of a Japanese carrier to book a trip on a Polish airline? This is where knowing airline alliances and partnerships really comes in handy!

LOT is quite generous with partners and offers a good amount of award space that we can book with different kinds of miles, such as United miles, ANA miles, Aeroplan or Avianca LifeMiles. This could be invaluable if you are looking for award space in business class, or even in economy, for multiple passengers.

LOT surcharges are quite low, so even if you are booking an award that includes LOT flights with one of the programs that do pass on surcharges, such as Aeroplan or ANA, the surcharges will be low.

The first stop on my around the world itinerary is Israel. I fly to Israel often, but I’ve never flown on LOT before. I was really excited to try out a new airline and road test their business class. 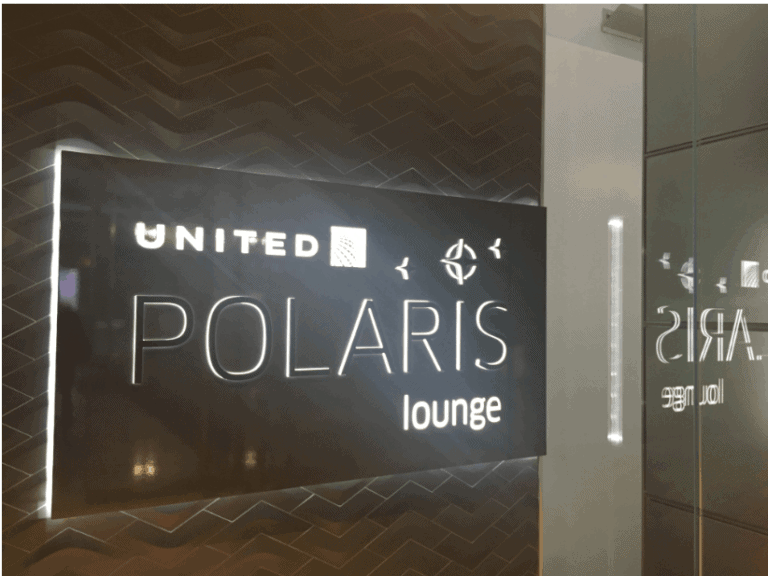 Sure, Star Alliance has a great network and very solid partners. But one of the main reasons I like to fly on Star Alliance partners is because I get to spend some time in United Polaris Lounges in Chicago ORD and Newark EWR airports.

Polaris is only open to passengers traveling in United Polaris business class and on Star Alliance business and first class tickets. Therefore, it is far less crowded than United or even Lufthansa clubs that are open to elites or anyone who buys an annual membership.

In addition to the buffet, there’s a sit down restaurant where you order off the menu. I like the service and the fact that the food is prepared fresh and isn’t sitting out at the buffet. On this occasion, the food looked better than it tasted and someone needs to teach the chef how to use salt. 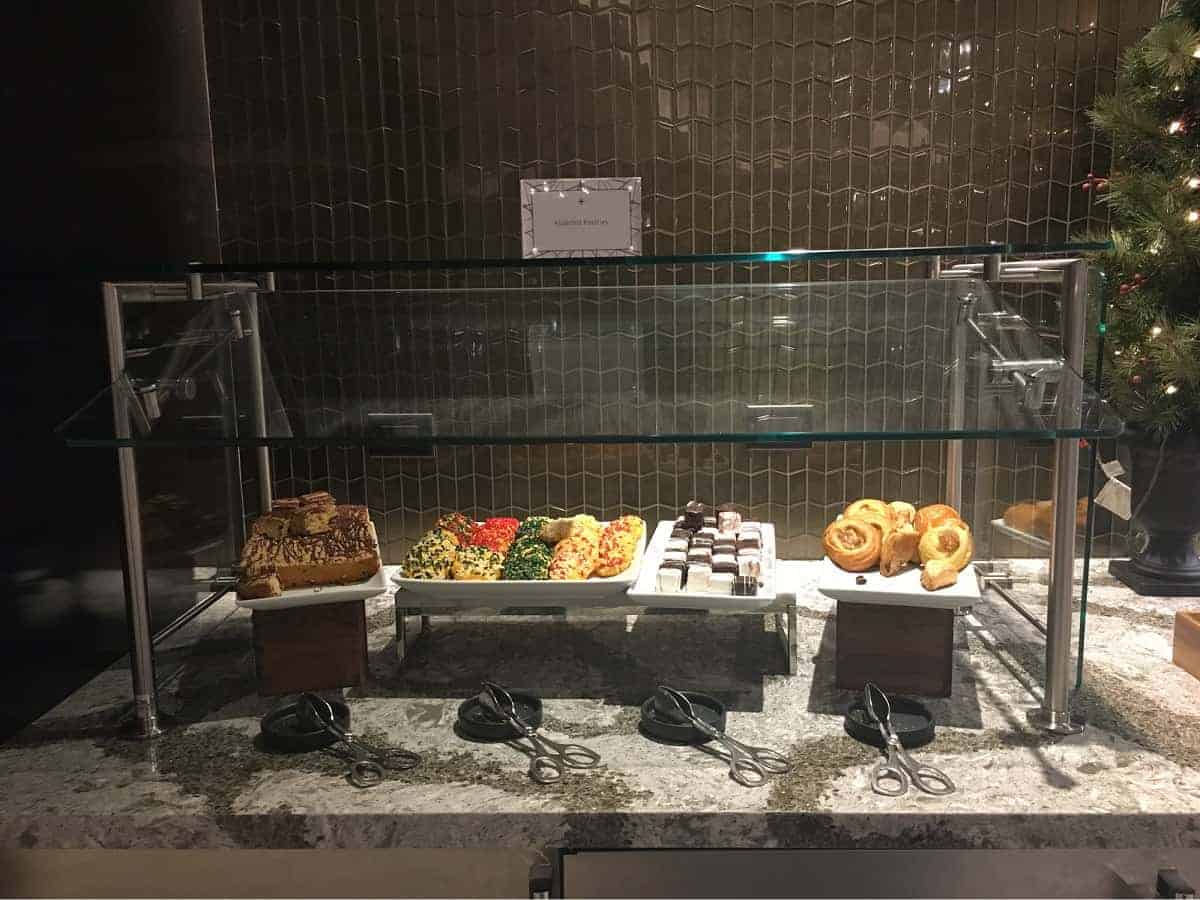 Desserts at the United Polaris Lounges

I did enjoy the drinks and snack station though. I always crave salty, crunchy snacks on long travel days. 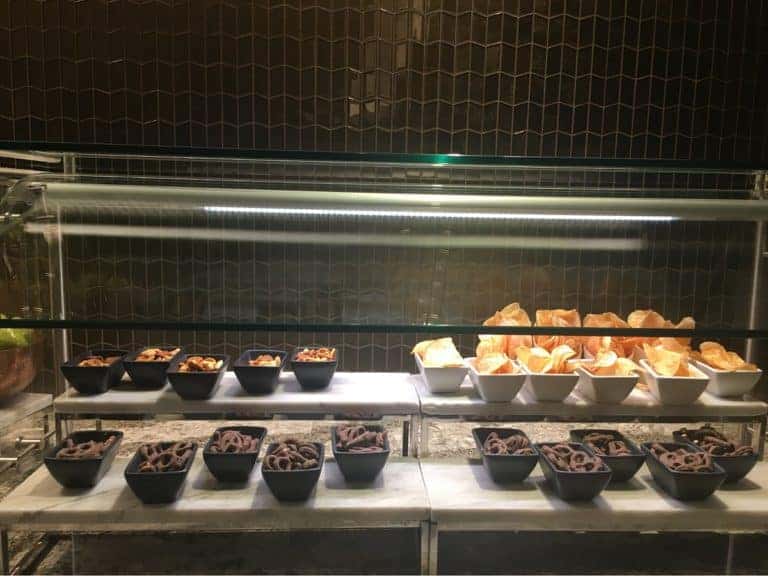 I had an almost seven-hour layover in Chicago, so I had a chance to try a few food options and test Polaris’ fabulous showers. You’ll have to see an attendant to get a key and you can also borrow a hairdryer, a curling iron or a hair straightener. Well, ladies, I guess that’s something to do on a long layover!

The showers, just like the restrooms, were kept immaculately clean and were stocked with lovely smelling products. 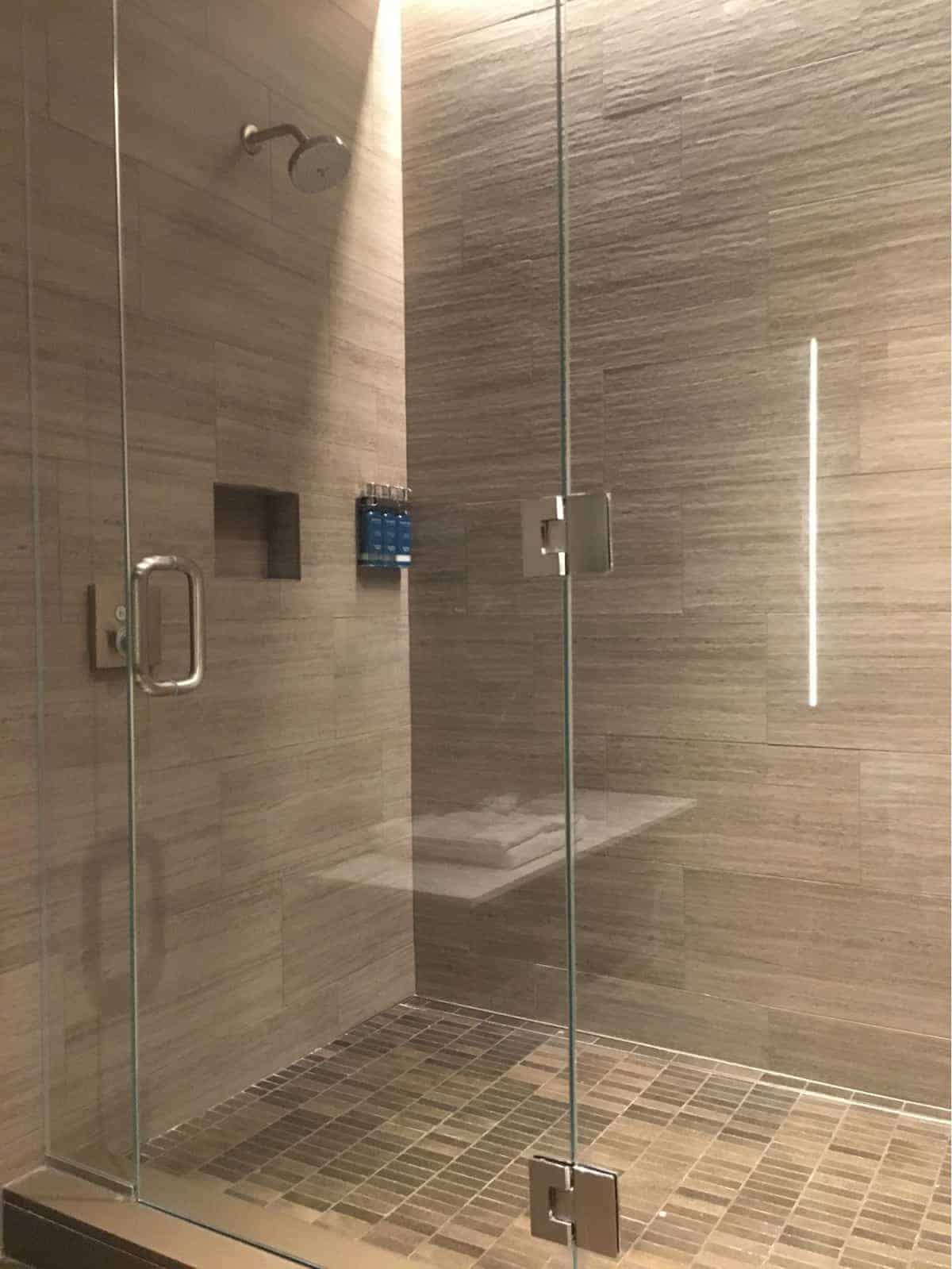 You get lovely white fluffy towels and a pair of slippers. Here’s a pro tip, always bring a pair of hotel slippers on the flight. I always have a pair with me, whether flying business or economy. They weigh nothing and take no room in your carryon. Wearing slippers on the plane is so much more comfortable than wearing shoes! 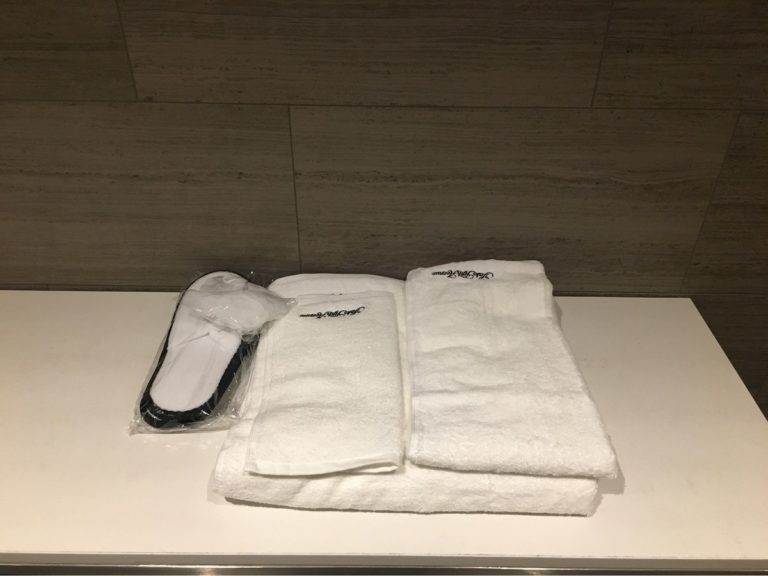 I have short hair, and didn’t need to borrow a hair straightener, so I had to occupy myself in other ways. I’ve camped out at one of those comfortable armchairs that have a table light, plugs for your laptop and other devices and are very conducive for getting some work done. 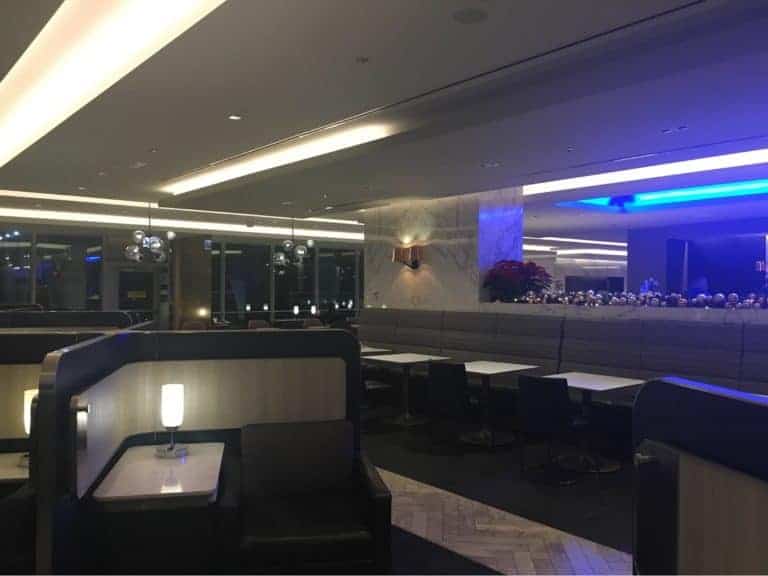 The lounge, and the long beautiful bar, were both a bit crowded when I arrived at 3 P.M., but by about 5:30 P.M. the lounge was practically empty. By 7:30, it was busy and hopping again. But even when full, there were plenty of seating options.

The area by the showers is a quiet, darkened area with daybeds. Great for taking a nap or just relaxing with a book. 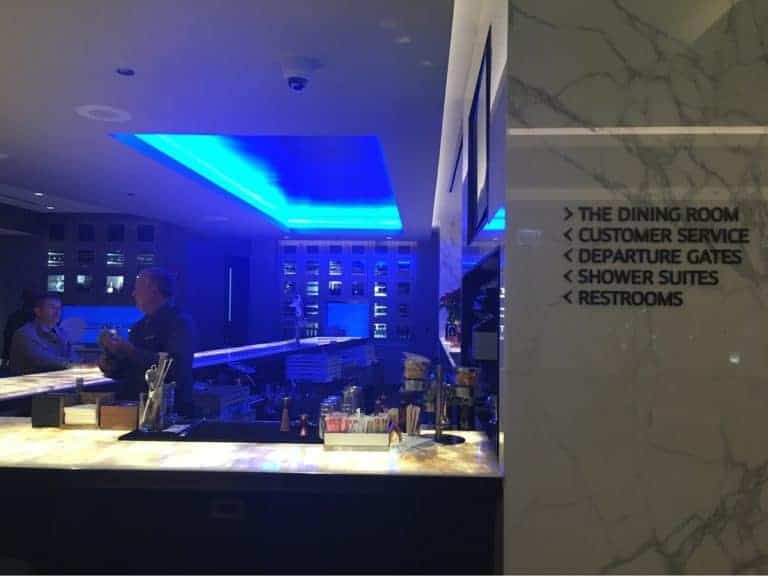 Keep in mind that Polaris lounge closes at 9 P.M. and the showers/daybeds area closes at 8:15.

After my second sit down meal (because why not), it was time to head over to Terminal 5 to catch my flight. Polaris is located in Terminal 1 in concourse C by gate C18, so it was a bit of a hike. I’d suggest leaving yourself plenty of time to get over to another terminal at ORD. I was planning on taking a shuttle that runs airside, but looks like it doesn’t run after 8:30 P.M..

I had to leave the terminal and take a bus outside security to Terminal 5 and then go through security again. There’s no TSA Precheck in Terminal 5.

The boarding started just five minutes late. Once most business class passengers were on board, the flight attendants immediately came by with welcome drinks and small canapés.

LOT flies a Boeing 787 Dreamliner on its Chicago-Warsaw route, and it looks and feels like a new aircraft. It’s a little puzzling, therefore, that LOT chose the 2-2-2 seat configuration. I always get an aisle seat in the middle, so that doesn’t bother me. But if you are in the two seats by the window, you’ll either be climbing over someone or have your neighbor climb over you. Surprising to see such gorgeous aircraft with old-style business class.

The seat, however, was wide and comfortable. There was storage under the footwell but it was too far out of reach to be useful and there’s definitely not enough storage at your fingertips. 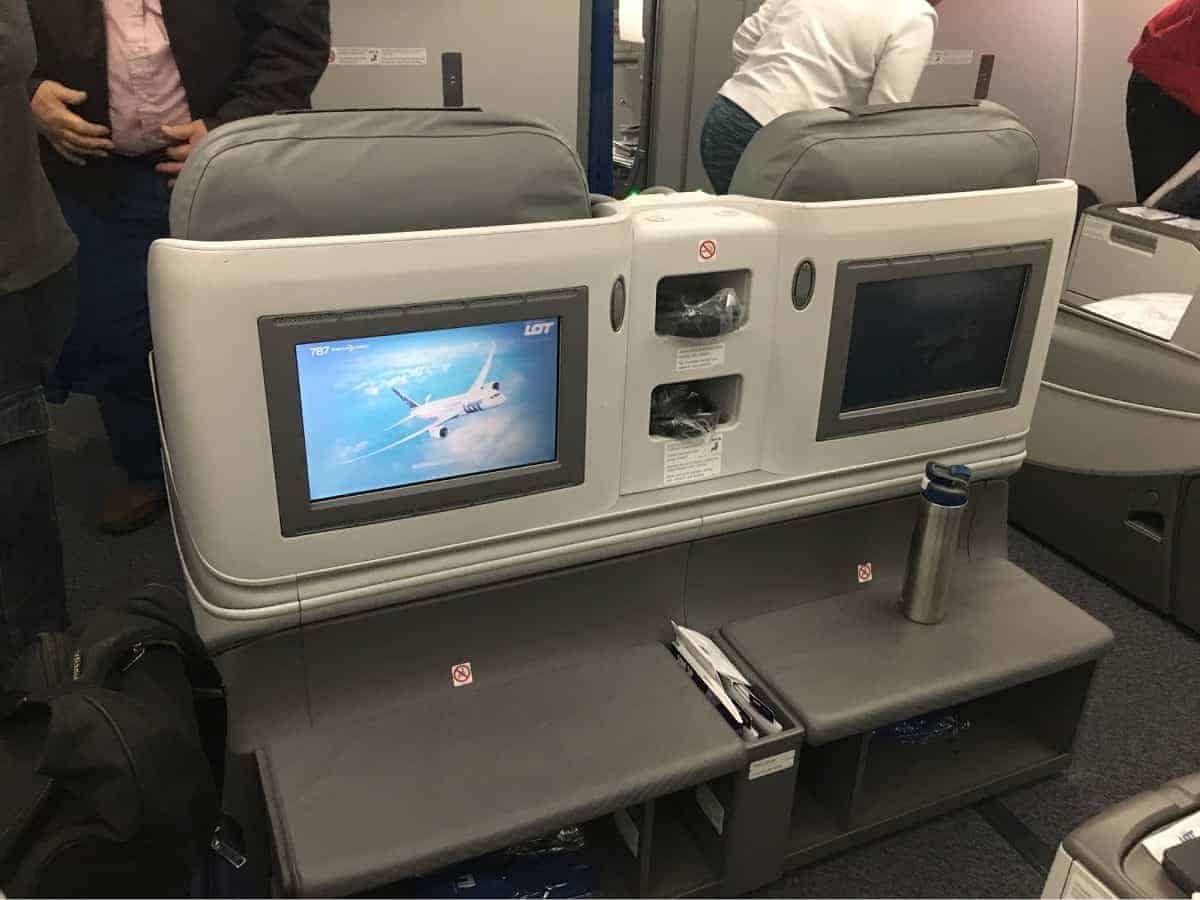 The only thing I didn’t like was the table, it was wobbly and felt unstable. 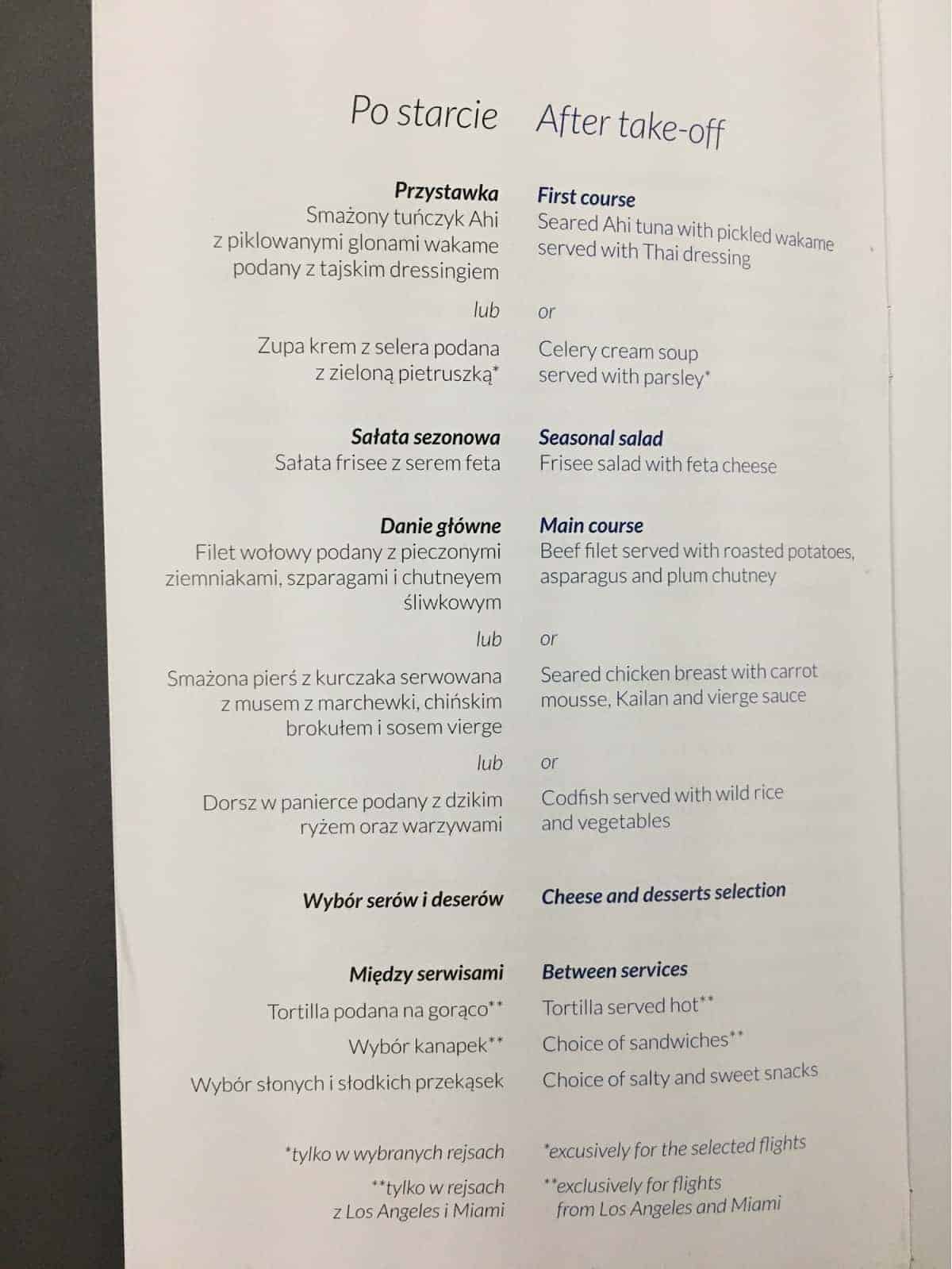 Shortly after takeoff, the flight attendants passed around some nuts and took the drink orders. A  few minutes after that, the purser made an announcement asking the passengers to refrain from eating nuts because there was a passenger on board with a severe nut allergy. I thought someone would come around to collect the nuts that were just passed out but no one did. This part was a bit confusing.

The food was fresh, delicious and well presented. In spite of the fact that just a couple of hours ago I ate at the sit down dining room in the Polaris lounge, I enjoyed my dinner. I can never say no to good food! There was no shortage of alcohol either, as there was wine and champagne with dinner and after dinner drinks served with dessert. 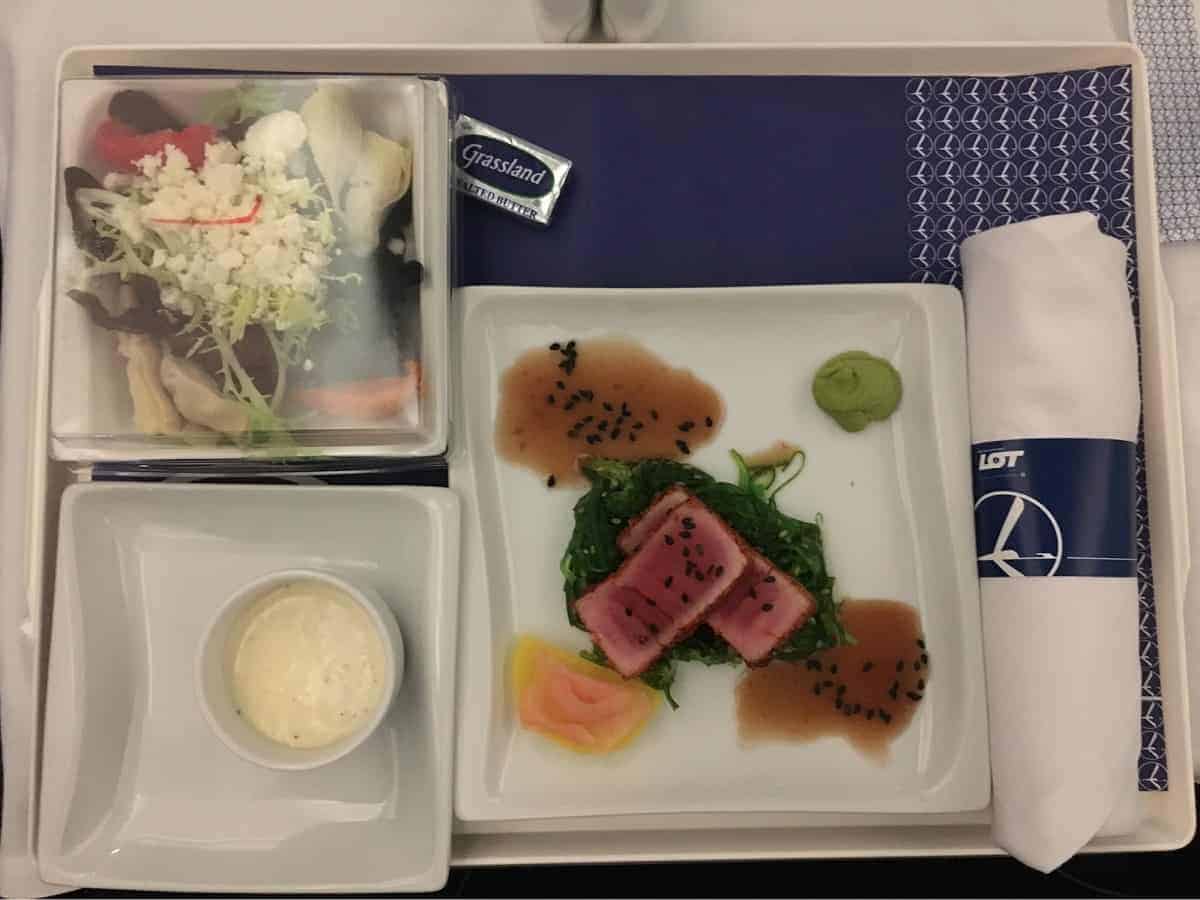 For breakfast, I opted for a continental breakfast, and as usual, this is always airlines’ weakest meal. It was enough to tie me over till I could get to the LOT lounge in Warsaw and get some lunch. 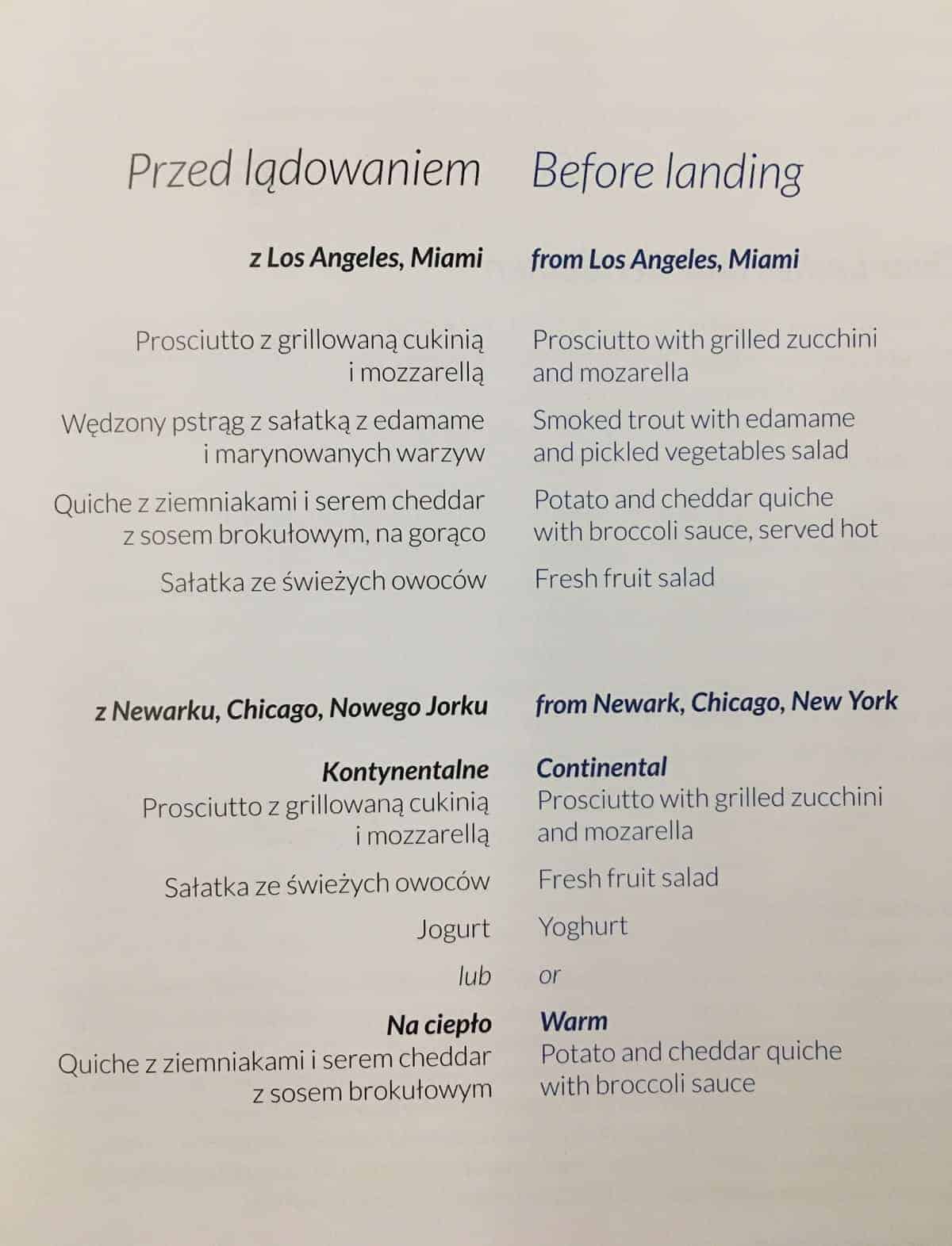 Right before landing, the flight attendants passed around some traditional Polish chocolates. Chocolate is always welcome in my world, and that’s a great way to say goodbye.

I had a two-hour layover at Warsaw airport before my next flight, so after landing, I headed straight to the lounge. And, of course, I had to sample the food there too. The lounge was very crowded, but they never ran out of anything. There were a few cold appetizers, soup and a couple of hot food options. The food was of the traditional, Eastern European hearty variety. I grew up with this kind of cuisine, so it was perfect, like coming home.

To make a long story short, service on this LOT flight in business class was great. Business class on this three-cabin aircraft had just 18 seats. We had two very friendly, efficient and polite flight attendants with us who provided excellent service on board.

My only criticism would be LOT’s weak TV and movie options. The inflight entertainment system was definitely lacking. There weren’t that many choices of either movies or TV shows and while I would’ve liked to watch some European movies, the TV screen was too far for me to see the subtitles.

Before I went on this trip, I’ve booked another award ticket on LOT to Budapest with 75,000 United MileagePlus miles for one-way in business class. I was so excited to find award space and only have one connection from my home airport that I decided to go for it before even trying out LOT first.

Having booked my second LOT flight before even taking the first, I am glad I did! The excellent service, the delicious food and comfortable seat, all made a great first impression. I am looking forward to another flight on the Dreamliner.

This Star Alliance partner definitely deserves more attention. LOT flies newer aircraft, has nonstop service to Eastern Europe and good connections to the rest of Europe and the Middle East. It also opens a decent amount of award space to partners both far in advance and close to departure. Combine that with good service and delicious food, and you’ve got yourself a very pleasant way to get across the Atlantic! 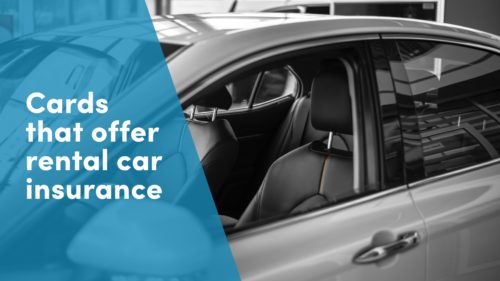 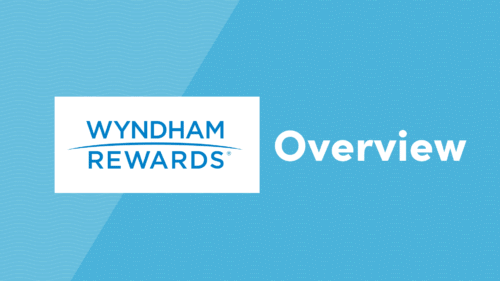 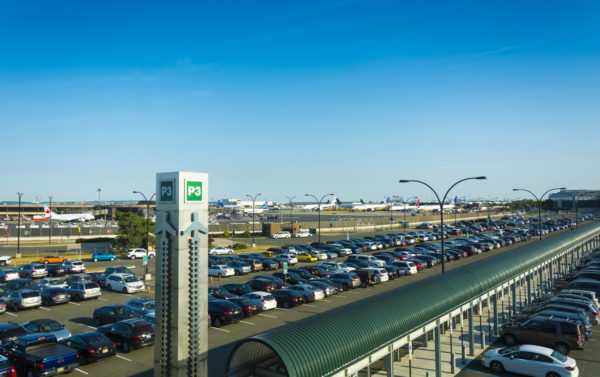 8 Websites That Help You Find Airport Parking for Cheap