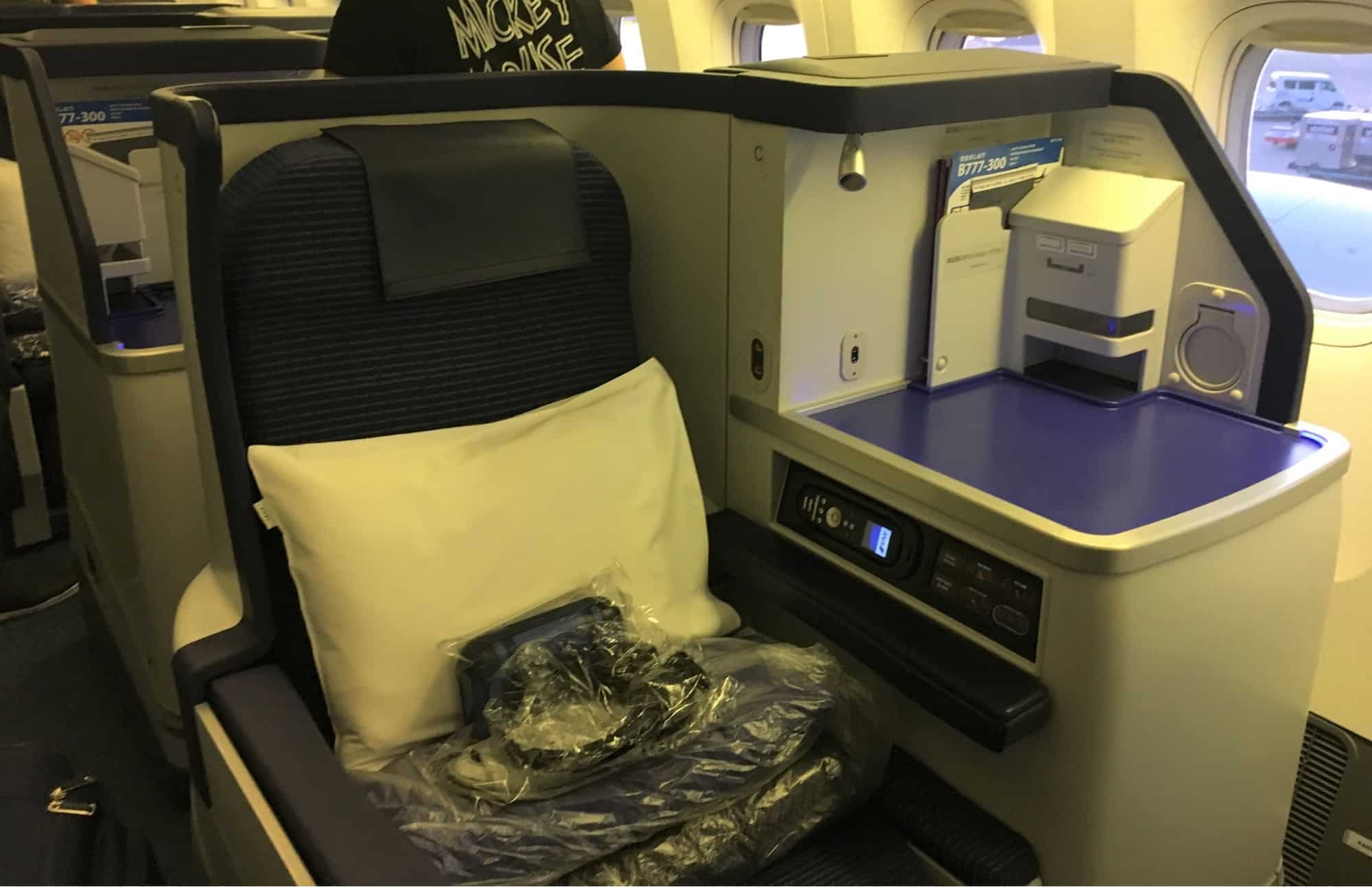 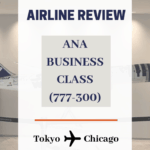 After our great stay in the Maldives, it was time to head home. I booked the trip home on ANA’s business class between Tokyo to Chicago which I want to share below, but first, I need to share my strategy for how I arranged this final trip home.

The flights to/from the Maldives were booked as a separate reservation and our flight home was from Bangkok, Thailand. Because of the late-night arrival from the Maldives and very early morning flight back home, we decided to spend two nights in Bangkok.

If my trip consists of two separate reservations, I always try to build in ample transfer time. If my first flight is late and I don’t make it to my second flight, the second airline doesn’t have to accommodate me and I could be stuck. That’s not a position I ever want to be in, so a two-night layover in Bangkok seemed optimal.

Bangkok isn’t my favorite city, and because this was the tail end of our around the world trip, I didn’t want to deal with big city traffic and chaos. My husband and I wanted to stay near the airport because our flight from the Maldives arrived very late at night, and my flight home, two days later, departed very early in the morning.

Thankfully, there’s a Le Méridien Suvarnabhumi, Bangkok Golf Resort & Spa just 20 minutes from the airport. The hotel has a free airport shuttle and is an oasis of calm in hectic Bangkok.  We chose to pay cash, rather than use the points because we wanted to book a rate that included breakfast.

I highly recommend this resort if you have an overnight layover in Bangkok. The breakfast was great, there’s a beautiful pool and the rooms are very comfortable. 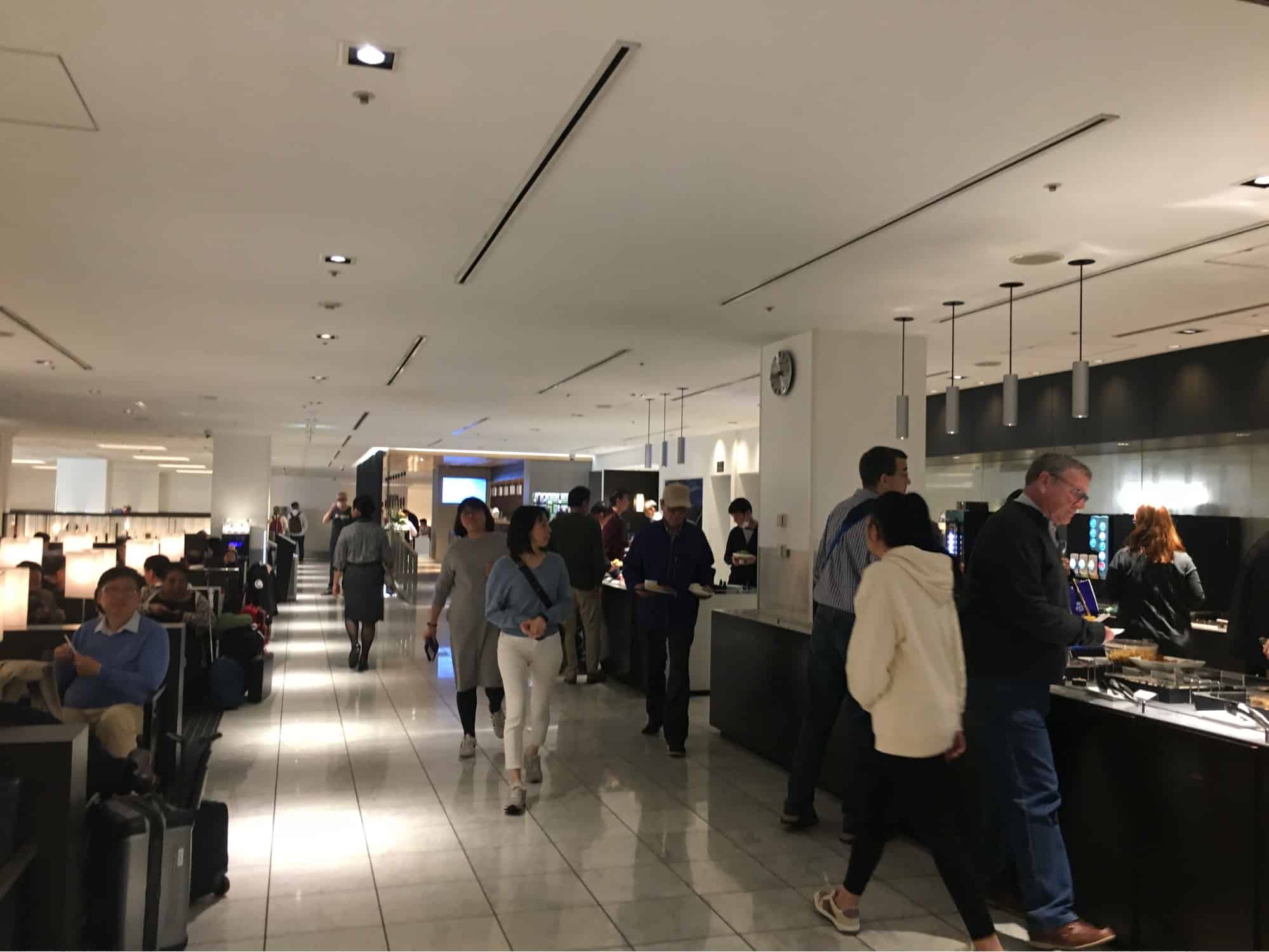 I’ve visited ANA lounges before, so I knew what to expect. The lounges are usually very crowded, to the point where you need to walk around to look for an open seat. They do have nice showers though!

If you’d like to take a shower (and I highly recommend taking advantage of this perk before/after a long flight), register at a self-service kiosk right away because there might be a wait. I entered my name but because none of the showers were available immediately, I had to go see the attendant to get a pager. After about a 15-minute wait, it was my turn.

The food at the lounge wasn’t great, but there was plenty of alcohol, including self-serve beer machines. The food options included made to order noodles that you had to order from a cook in one window, then collect your order from another window. I can’t eat gluten so that wasn’t an option for me, but the noodles didn’t look very appetizing anyway.

There was also salad, one noodle dish, and what I call “fake sushi”. Fake because there was no fish in these triangle sushi or onigiri, but rather strange unidentifiable stuff. Mostly they were just plain rice. There were also lots and lots of breakfast-type sweet pastries.

When I got to the gate, there were already lines for different boarding groups. As is sometimes the case with U.S. bound flights, someone was walking around asking additional security questions. They asked if I packed my bags myself, if they were with me the whole time etc. 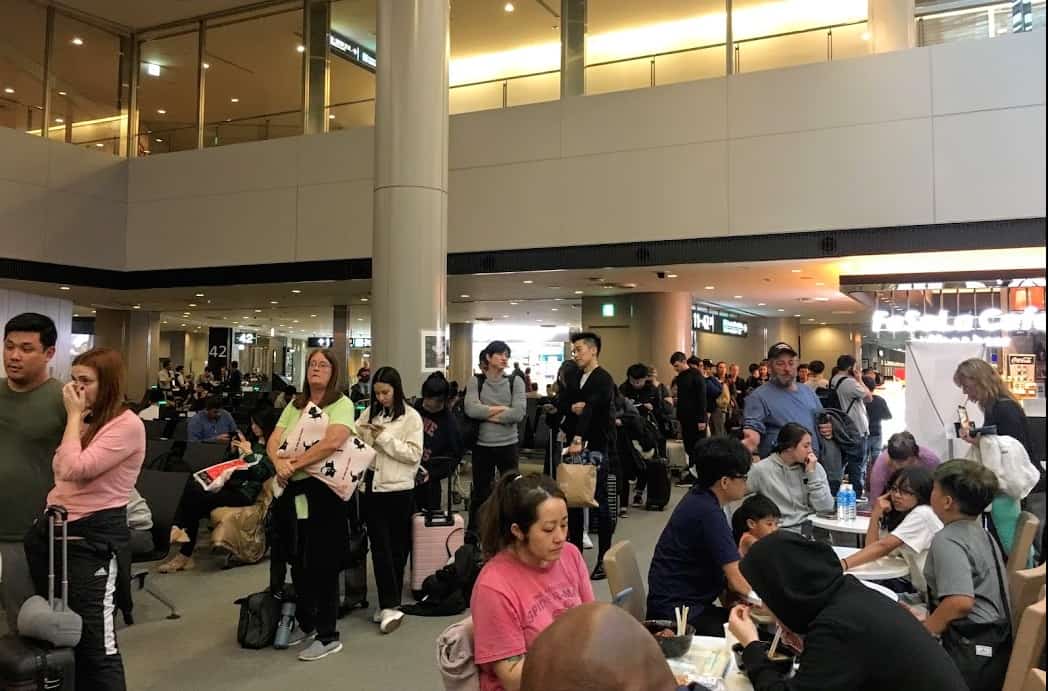 I chose a window seat with a table between me and the window. I always get cold sitting right next to the window, so trading a bit of privacy for a more comfortable temperature (for me) is a good compromise. The seat was really comfortable and the blanket and the mattress pad were topnotch.

I love the fact that ANA provides slippers in business class. I always have a pair of hotel slippers in my carry on anyway, and change into them on a long flight even when flying in economy. It’s so much more comfortable than wearing shoes.

The little storage compartment was just big enough for the amenity kit and a couple of other small things. 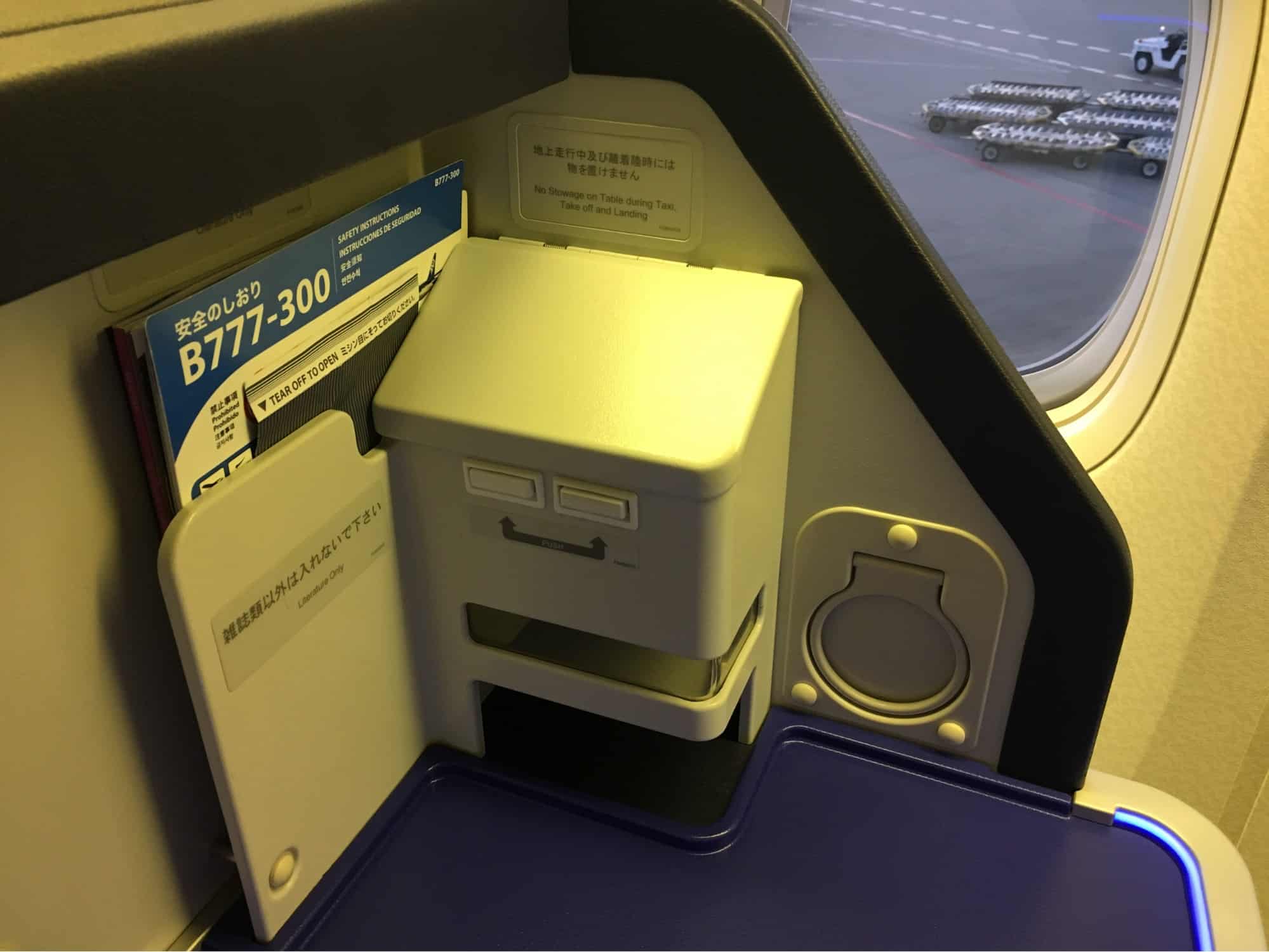 When everyone was seated, the flight attendant came by with a welcome drink and offered newspapers and magazines.

The best part of flying ANA is the onboard service. The flight attendants are always very friendly, attentive and polite. I’ve never felt like I am bothering them and they manage to anticipate your needs without being intrusive.

The inflight entertainment system had a nice large screen but was really lacking in options. There were very few TV shows and a very limited selection of movies. On such a long flight there definitely should be more variety. 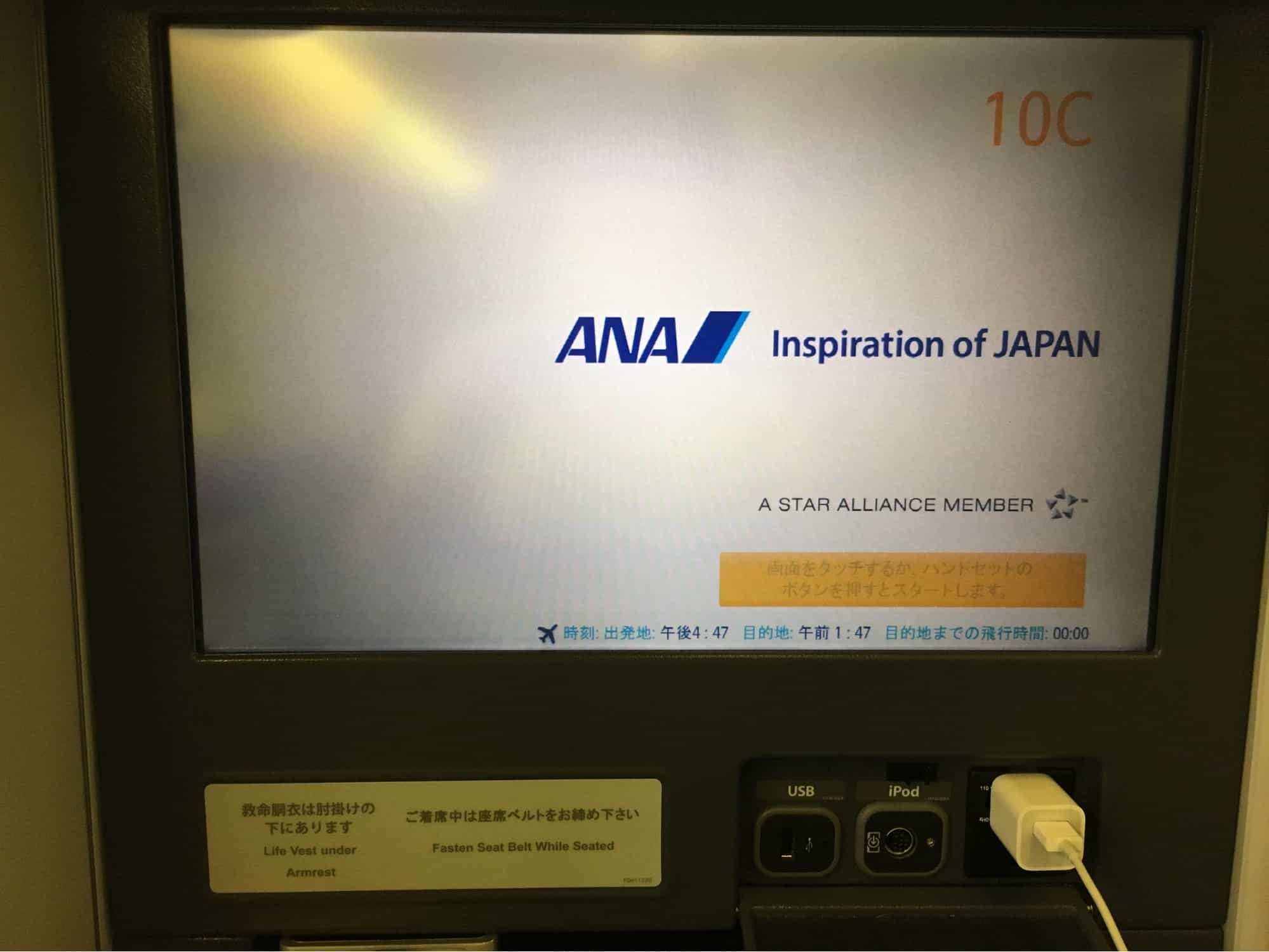 We got a beautiful hard-shell amenity kit with the usual eye mask, earplugs, and small toiletries. I keep business class amenity kits and use them to store cords, toiletries or other small items.

Right after takeoff, the flight attendants passed out the menus and I chose Western-style meal. ANA has an extensive drinks menu too – you can choose from a variety of spirits, beer and wine. 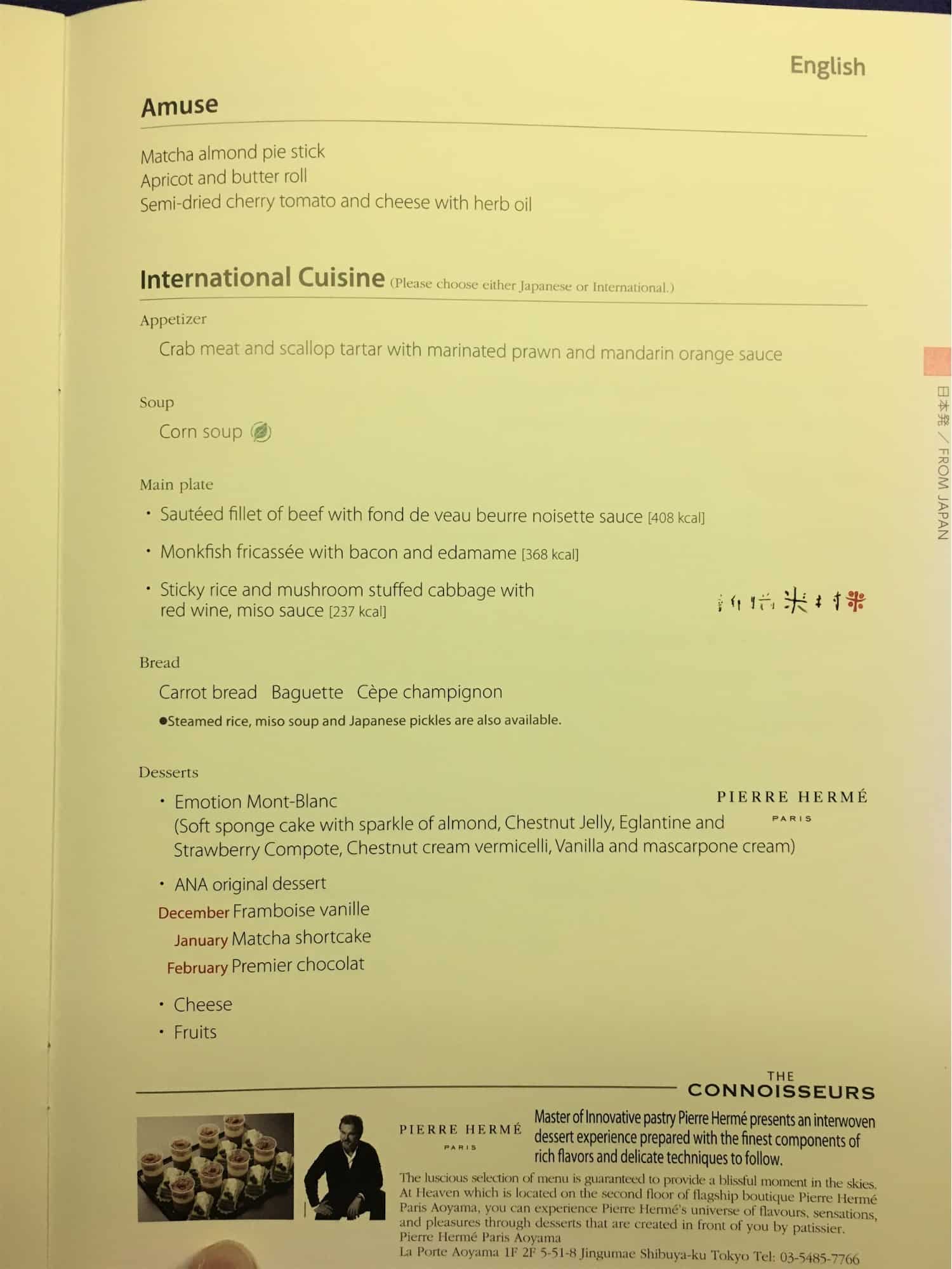 Like every other meal I’ve had in Japan or on ANA, everything was beautifully presented with impeccable attention to details. 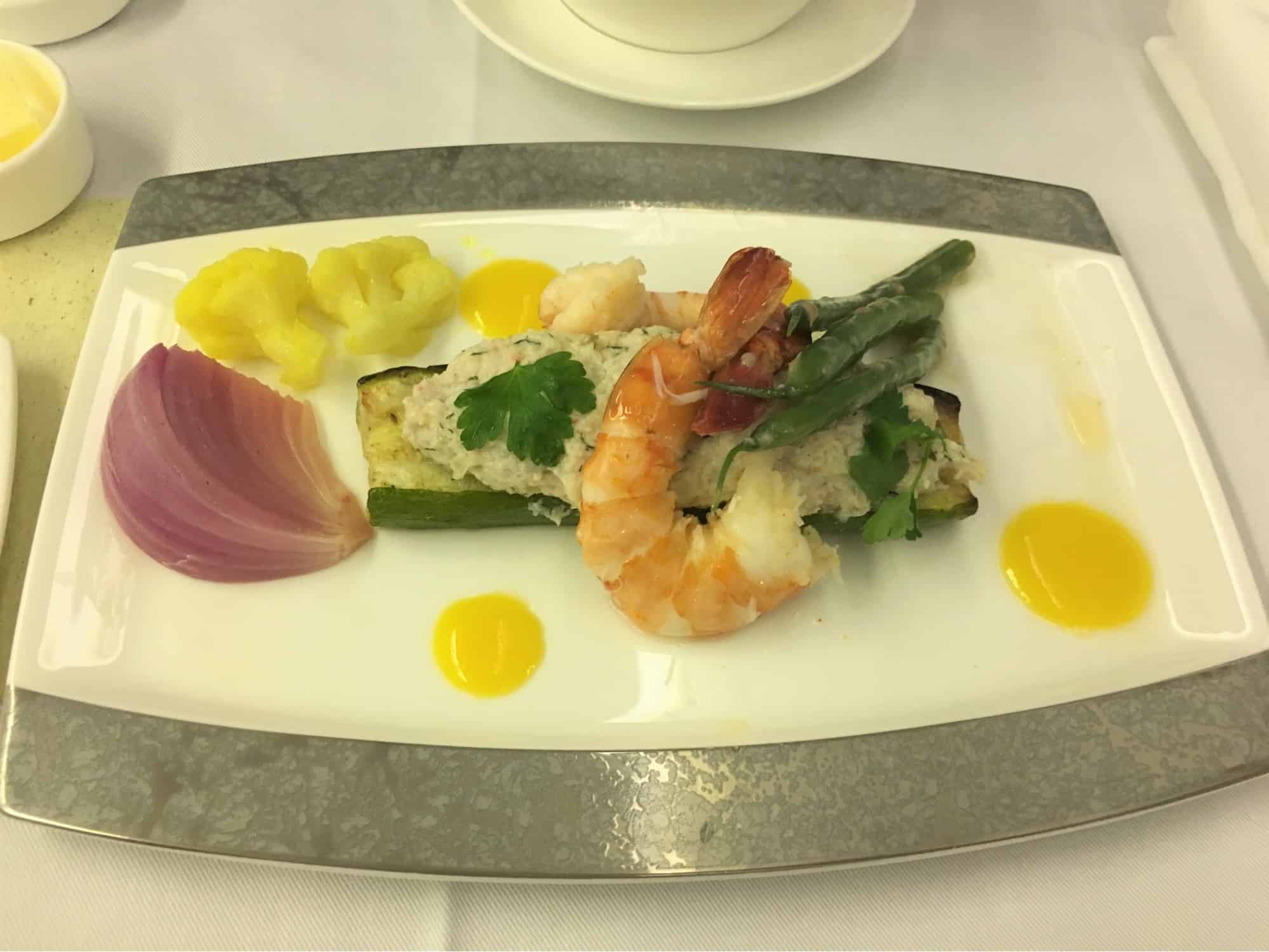 My crab appetizer had a lot more onion than crab, but the main dish was excellent. 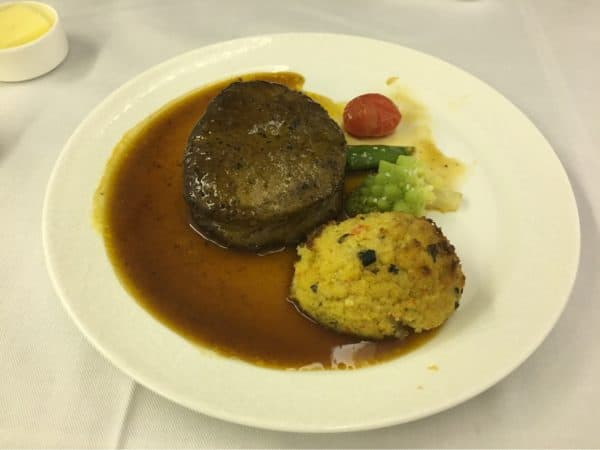 There was also a good selection of mid-flight snacks, although I mostly slept in between the meals and didn’t have an opportunity to try any. 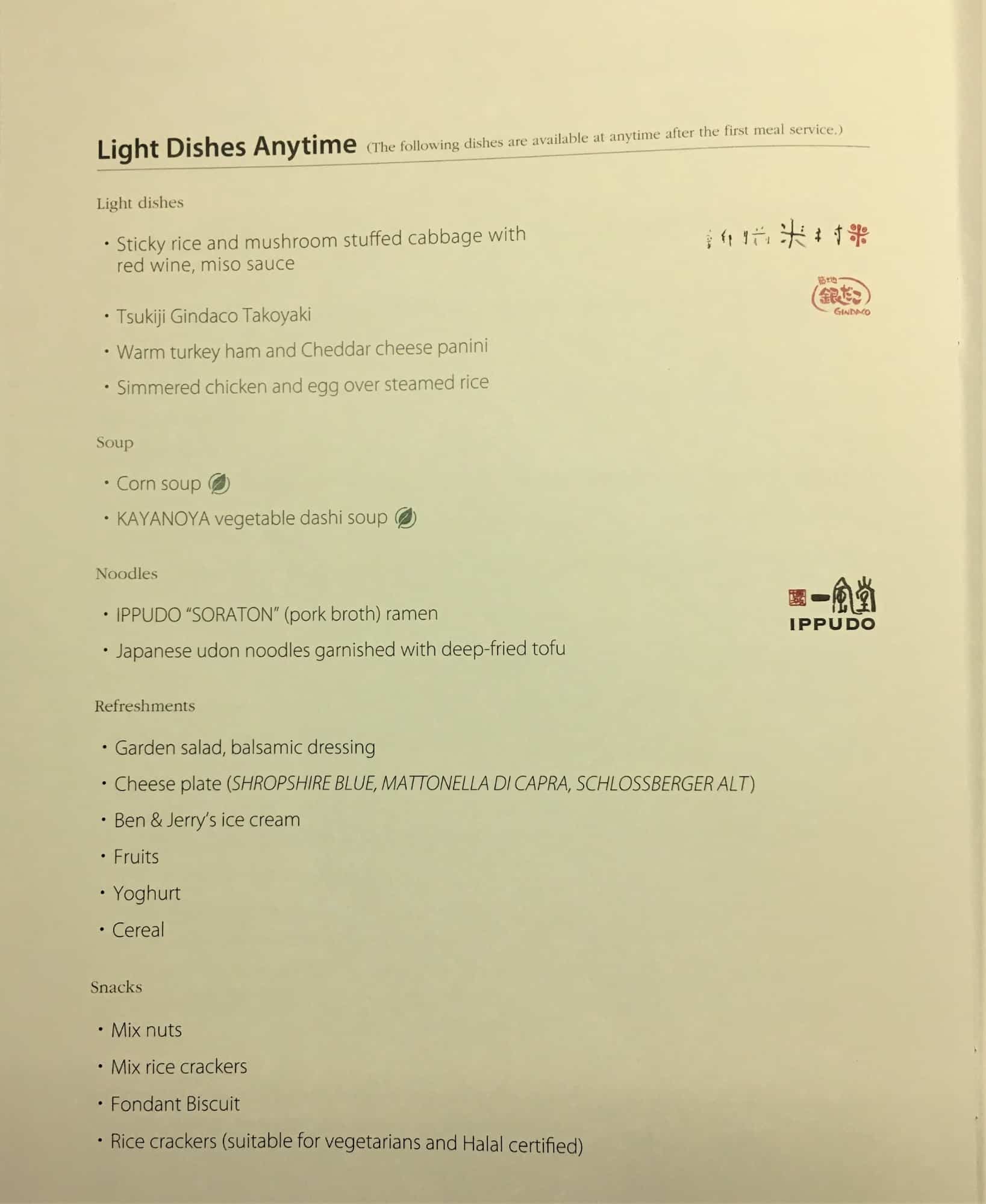 For my second meal, I chose the Japanese meal because I didn’t like the breakfast option, plus it wasn’t really breakfast time in either the departure or arrival time zones. The presentation again was beautiful and the food tasted very fresh. That little parchment packet is actually rice. What a cute way to serve this humble staple! 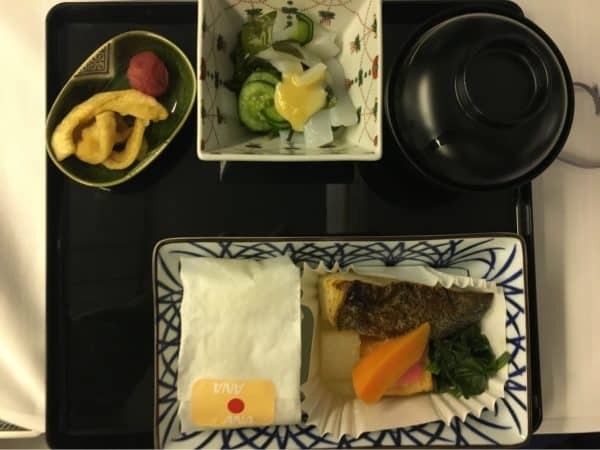 How to Book ANA Business Class with Points and Miles

ANA opens up a decent amount of award space to its Star Alliance partners like United and Aeroplan. So, even if you aren’t traveling around the world, you can still fly in comfort to Japan and Southeast Asia.

If you are booking ANA flights with Aeroplan, beware of high surcharges. You’ll need 75,000 Aeroplan miles one-way from the U.S. to Japan. Similarly, Avianca LifeMiles also requires 75,000 miles but they don’t pass on surcharges. Both Aeroplan and Avianca are transfer partners of Amex Membership Rewards and Capital One plus Avianca is also a partner of Citi ThankYou Points.

United doesn’t pass on surcharges either so the taxes/fees will be minimal. You can book a one-way business class ticket for 80,000 United miles. You can transfer Chase Ultimate Rewards points to United if you need to top off your account.

Using Virgin Atlantic miles is a great way to book ANA business class. Virgin only allows round-trip bookings but has the best redemption rates. You need just 90,000 miles for a round-trip award from the west coast and 95,000 miles from central and eastern U.S. The surcharges will be about $300 for the round-trip.

Finally, you can use ANA’s own Mileage Club program to book this award. You can transfer Amex points to ANA but transfers can take up to 2-3 days. There are a couple of benefits to booking with ANA miles though. 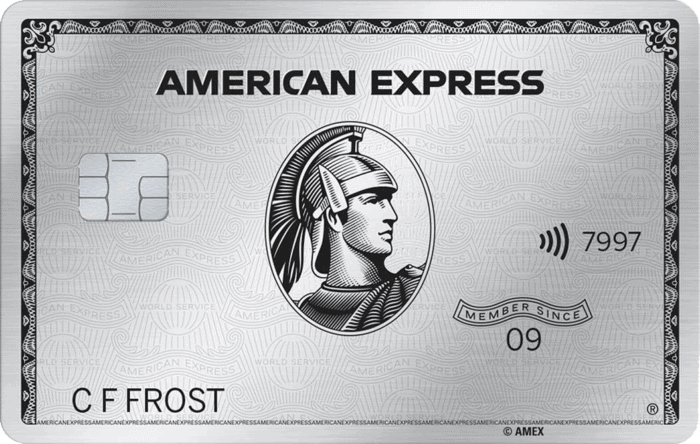 Now, the number of miles you’ll need will be determined by the dates you travel as ANA has low, regular and high seasons. You’ll need 75,000 miles in low season, 85,000 miles in regular season and 90,000 in high season for a round-trip award in business class. The surcharges should be around $300.

My husband and I couldn’t get two seats on the same flight home, so my husband flew on another ANA flight later that day. Finding two award seats in business class could be tough under the best circumstances, and even more so when you are booking complicated around the world itineraries. If you are ready to fly separately from your travel companion, the chances of scoring great flights will be much higher.

He chose a seat in the small front section of the business class cabin and he said it was very quiet and private, almost like the first class. I’d definitely keep that in mind if or when I fly ANA again.

I really like ANA’s on board service and food selection. I’ve flown on short domestic ANA flights and the service was on par with business class. I think it’s a company culture and you really can’t go wrong with ANA. Plus my seat was really comfortable which is the most important part of long-distance travel.

My least favorite part about ANA business class is always the lounge. The lounge was crowded, the food was subpar and all ANA lounges are very bland for my taste. I am a big fan of restrained Japanese design aesthetic, but there’s a fine line between understated and sterile.

So overall, if the lounge experience isn’t a high priority for you, ANA offers a very comfortable ride and excellent service and food. It’s a solid choice and a good value for the number of points required and an option all points and miles travelers should consider for their Asia travel needs. 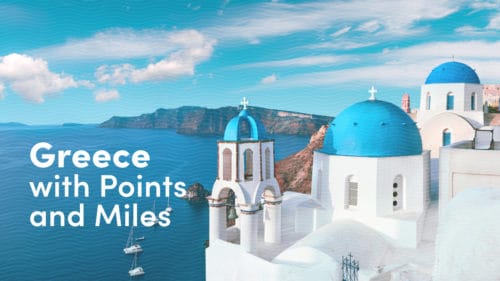 Best Ways to Fly to Greece With Points and Miles 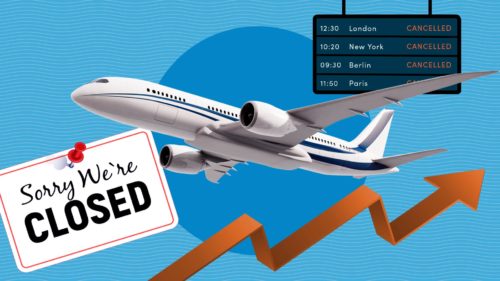 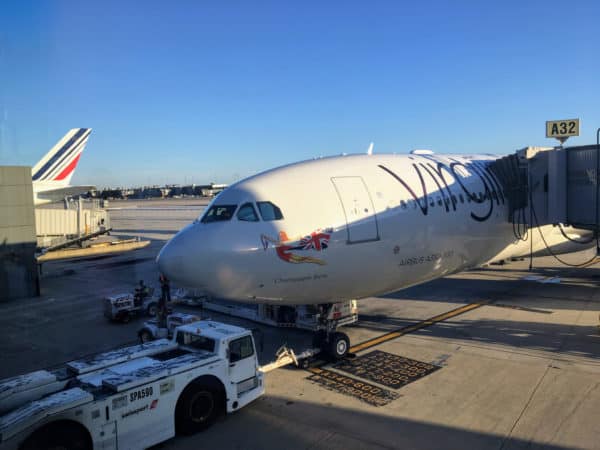 How to Redeem Virgin Atlantic Miles for Big Value