Today I want to talk about another way to combine two credit card welcome bonuses to make an unforgettable trip a reality. I traveled to Madrid and a few other cities in Spain earlier this year and enjoyed it immensely! While I didn’t use this exact method to get to and stay in Spain for my visit, below is an approach for you to make a similar trip a reality for yourself! 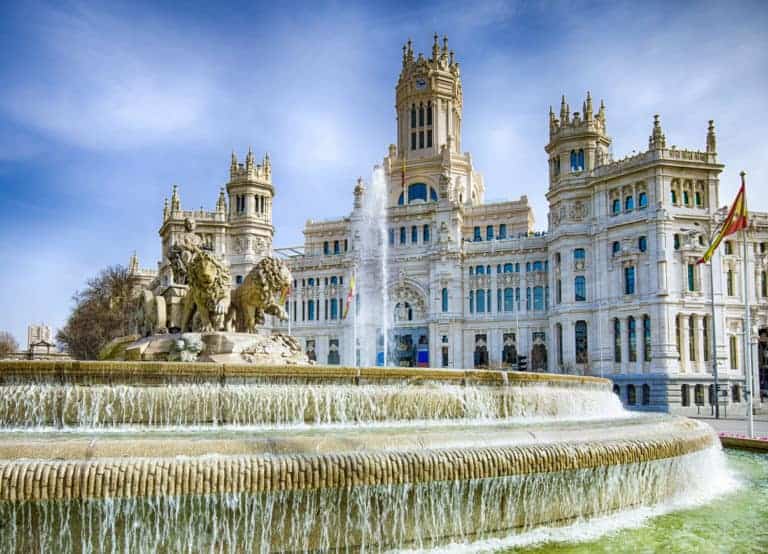 The AAdvantage Aviator Red World Elite Mastercard from Barclays often offers a 60,000 American Airlines mile bonus when you make your first purchase within 90 days and pay the $99 annual fee — yep, that’s it! Doing this will also get you an introductory Companion Certificate, which lets you bring a guest along on a qualifying round trip economy flight in the contiguous 48 United States for just $99 plus taxes and fees. This won’t help you much for a trip to Spain, but it’s a nice extra bonus! 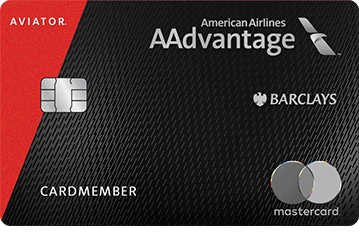 after your first purchase and payment of the $99 annual fee

The Platinum Card from American Express offers a standard welcome bonus of 60,000 Membership Rewards points but you can sometimes find an offer for 75,000 points after you spend $5,000 in purchases in the first three months of card membership. You’ll earn 5X Membership Rewards points per dollar spent on flights booked directly with the airline or with AmexTravel and on prepaid hotels booked through Amex Travel and 1X point per dollar spent everywhere else. 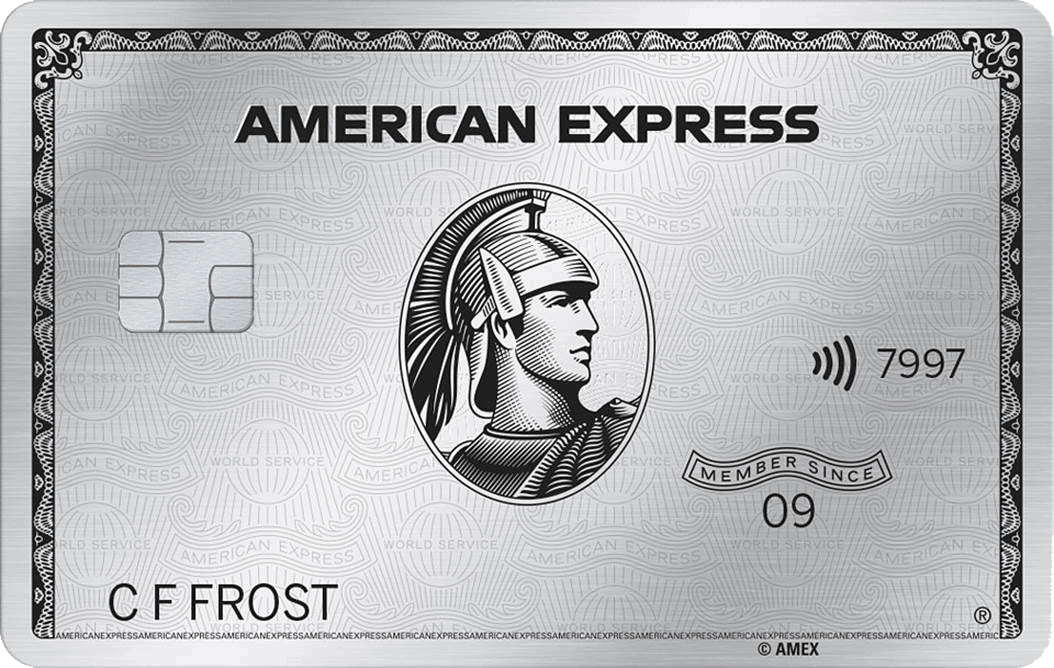 You’ll also receive a $200 annual travel fee credit for an airline of your choice, up to $200 in Uber credits (up to $15 per month, plus a bonus up to $20 in December), up to $100 in statement credits annually for purchases at Saks Fifth Avenue, and a statement credit to cover enrollment in Global Entry or TSA PreCheck. All of these benefits go a long way toward offsetting its high $550 annual fee. The card also includes the standard American Express benefits like purchase protection, return protection, extended warranty, and access to Amex Offers. 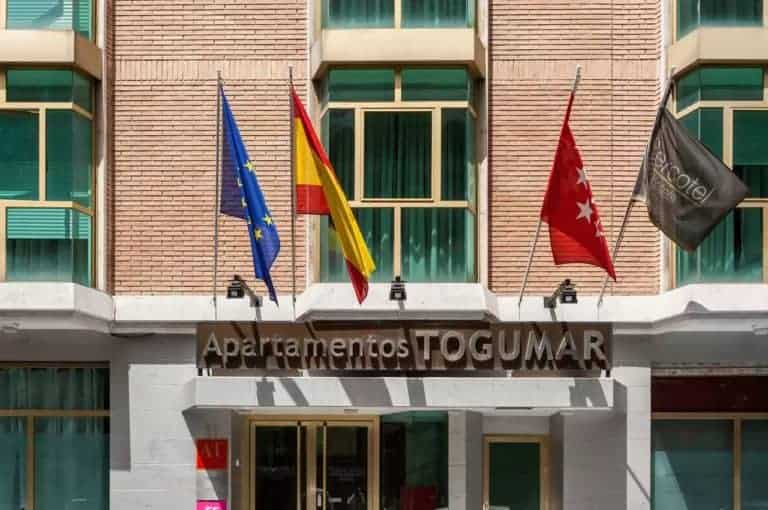 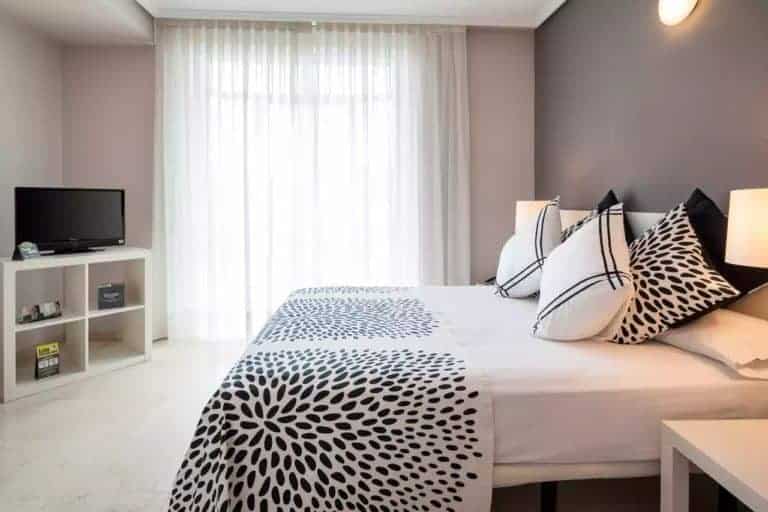 In the United States, Choice Hotels is best known for its budget properties like Comfort Inn and Econolodge. However, they also have top-tier hotels — in the US and other countries — known as the Ascend Collection. This collection includes Sercotel Hotels which is a Spanish chain that specializes in 3, 4, and 5-star hotels in city centers in Spain, Andorra, Portugal, Italy, and Latin America.

Madrid offers six Sercotel hotels that are bookable with Choice Privileges points, two of which are in the central part of the city: the trendy apartment-style Sercotel Togumar (cleverly disguised on the Choice Hotels website as the Econo Lodge Esentia Togumar) costing only 8,000 points per night, and the higher end Sercotel Gran Hotel Conde Duque costing 20,000 points per night. 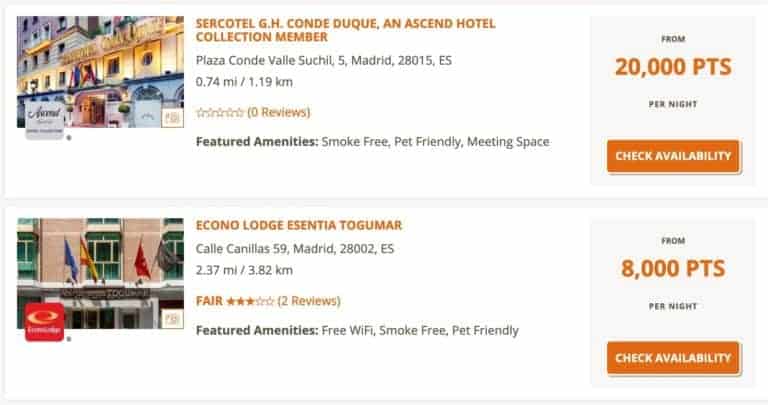 Despite the lack of reviews on the Choice Hotels website (as shown in the screenshot above), both hotels have 4/5 ratings on TripAdvisor with hundreds of reviews, so it’s likely that either property would provide a great place to stay on a trip to Madrid. Make sure you compare these points rates with cash prices though, especially if you’re traveling during the off-peak season – if cash rates are low, you may be better off saving your points for another trip.

Note that Choice Privileges only allows you to book hotel rooms 100 days in advance, so you won’t be able to book or even check for availability further in advance. Booking as close to 100 days in advance as possible will likely give you the best chance to get the hotel you want. 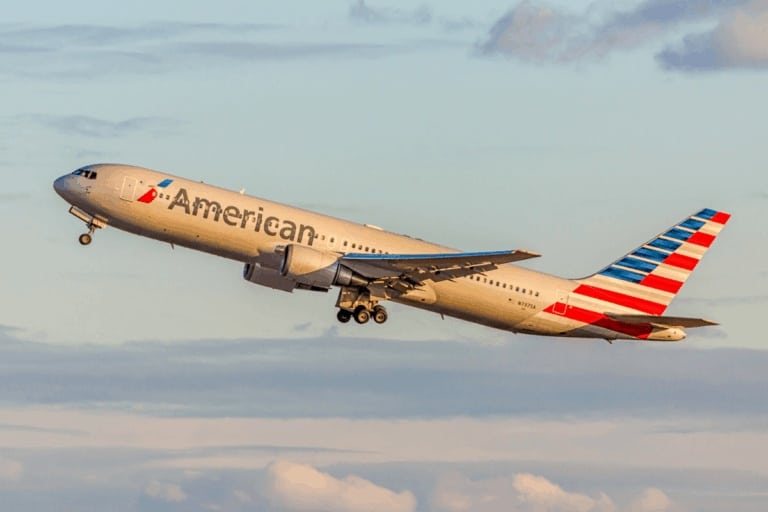 How to Get There

American Airlines AAdvantage award flights from the contiguous 48 states to Europe start at just 22,500 miles each way during off-peak dates (January 10 – March 14 and November 1 – December 14), and 30,000 miles each way the rest of the year. That means the 60,000 miles you’ll earn from making a single purchase with the AAdvantage Aviator Red card is enough for a round trip flight to Madrid from almost anywhere in the country anytime during the year.

American Airlines has nonstop flights to Madrid (MAD) from its hubs in Charlotte (CLT), Dallas-Fort Worth (DFW), Miami (MIA), New York-JFK, and Philadelphia (PHL). It is also partners with Iberia, a Spanish airline based in Madrid (MAD), which operates nonstop flights from Boston (BOS), Chicago-O’Hare (ORD), Los Angeles (LAX), Miami (MIA), New York–JFK, San Francisco (SFO), and San Juan (SJU). And if you don’t live in one of those cities, you can add a connection on American Airlines or Alaska Airlines from your home city for the same number of miles. 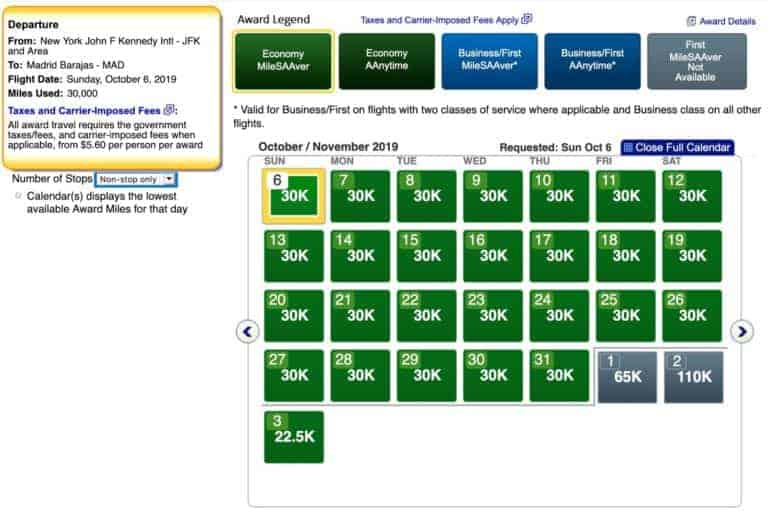 There’s no difference in how many miles you have to pay whether you’re flying American, Iberia, or another partner airline like British Airways. However, the taxes and fees you’ll have to pay in addition to your miles can vary significantly. For example, on a one-way flight from New York to Madrid, you’d have to pay exactly $5.60 in taxes on an American Airlines flight, around $76 in taxes and surcharges on an Iberia flight, and a whopping $267 on British Airways with a connection in London. 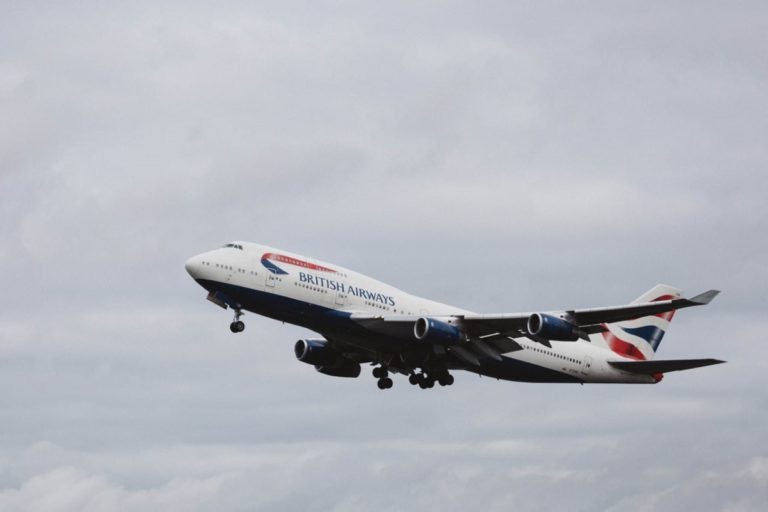 The Amex Platinum card welcome bonus is not available to applicants who currently hold or have previously had the card.

You may not be eligible for the AAdvantage Aviator Red Credit Card welcome bonus if you currently have or previously had an AAdvantage Aviator Red Credit Card. Barclays also reserves the right to deny the bonus if they believe you are using or will use the account for “abusive or gaming activity (such as, but not limited to, obtaining or using the account to maximize rewards earned in a manner that is not consistent with typical consumer activity and/or multiple credit card account applications/openings).”

after your first purchase and payment of the $99 annual fee

Just signing up for these two credit cards can easily cover an economy class flight plus a whopping nine days of lodging in Madrid if you opt for the 8,000-point per night hotel! That’s an absolute steal.

And if you would rather travel with someone else, just have them sign up for the Aviator Red too, and then they’ll have enough miles to pay for a flight! 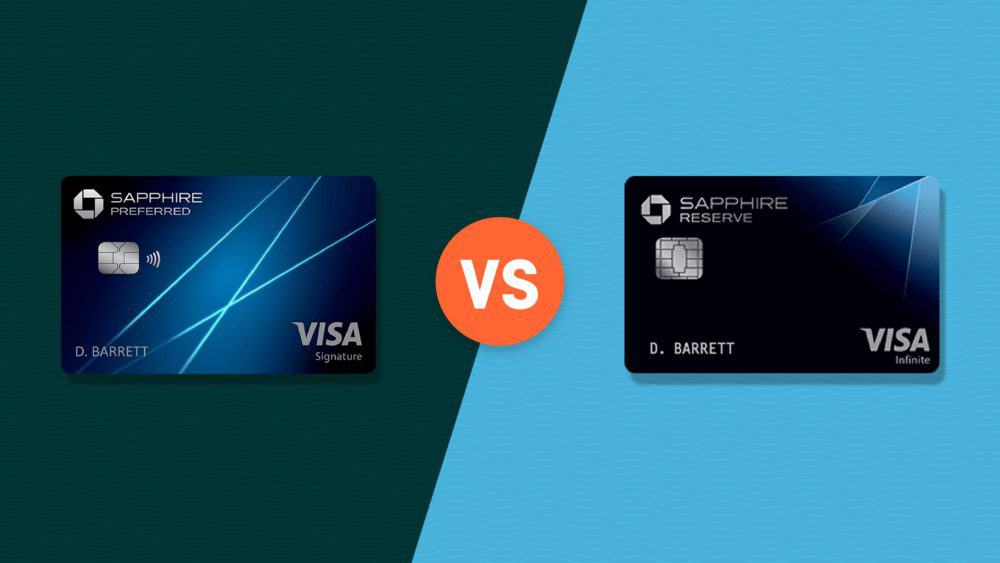 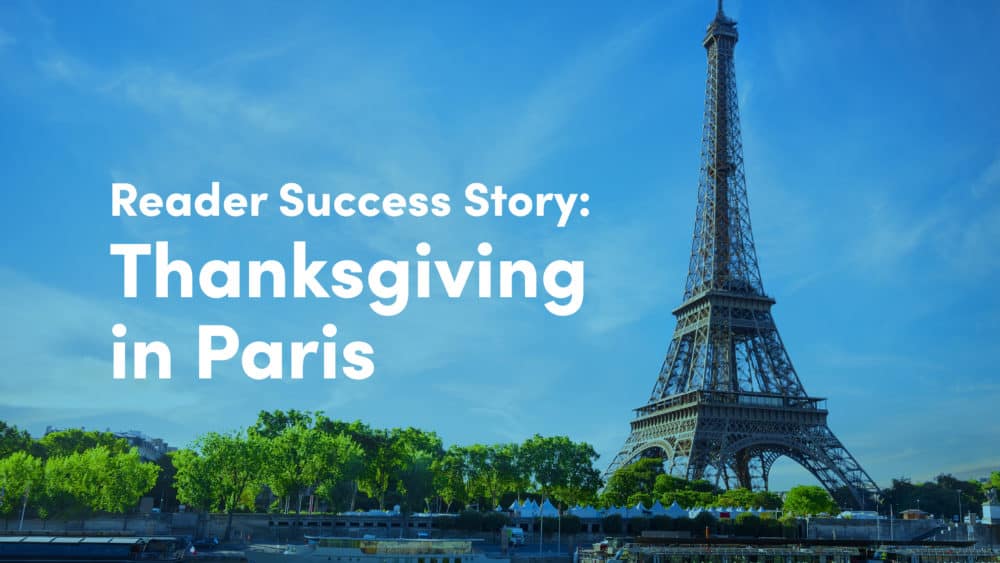 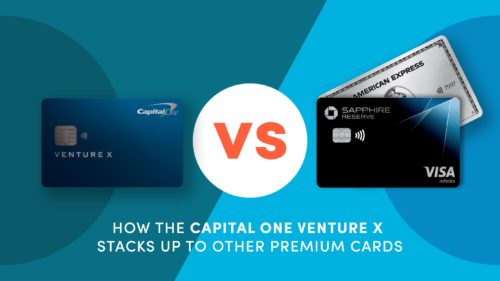 Capital One Venture X vs. Other Premium Travel Cards