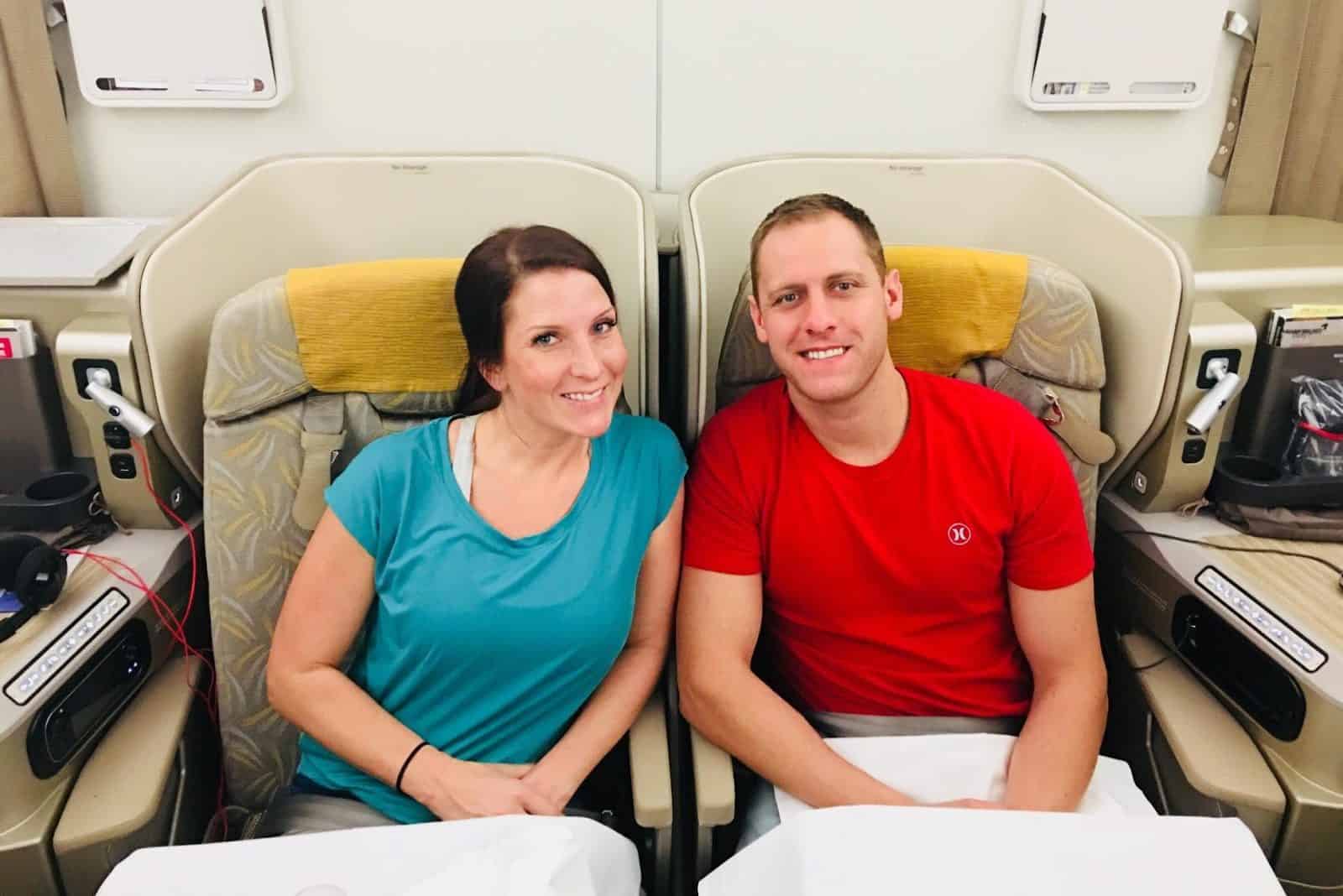 I started out dabbling in the points world with the Chase Southwest credit cards years ago, but I didn’t realize at the time how much bigger this hobby could be. In 2015 I was introduced to 10xTravel by my friend Nicole and I quickly became obsessed and started learning as much as I could. 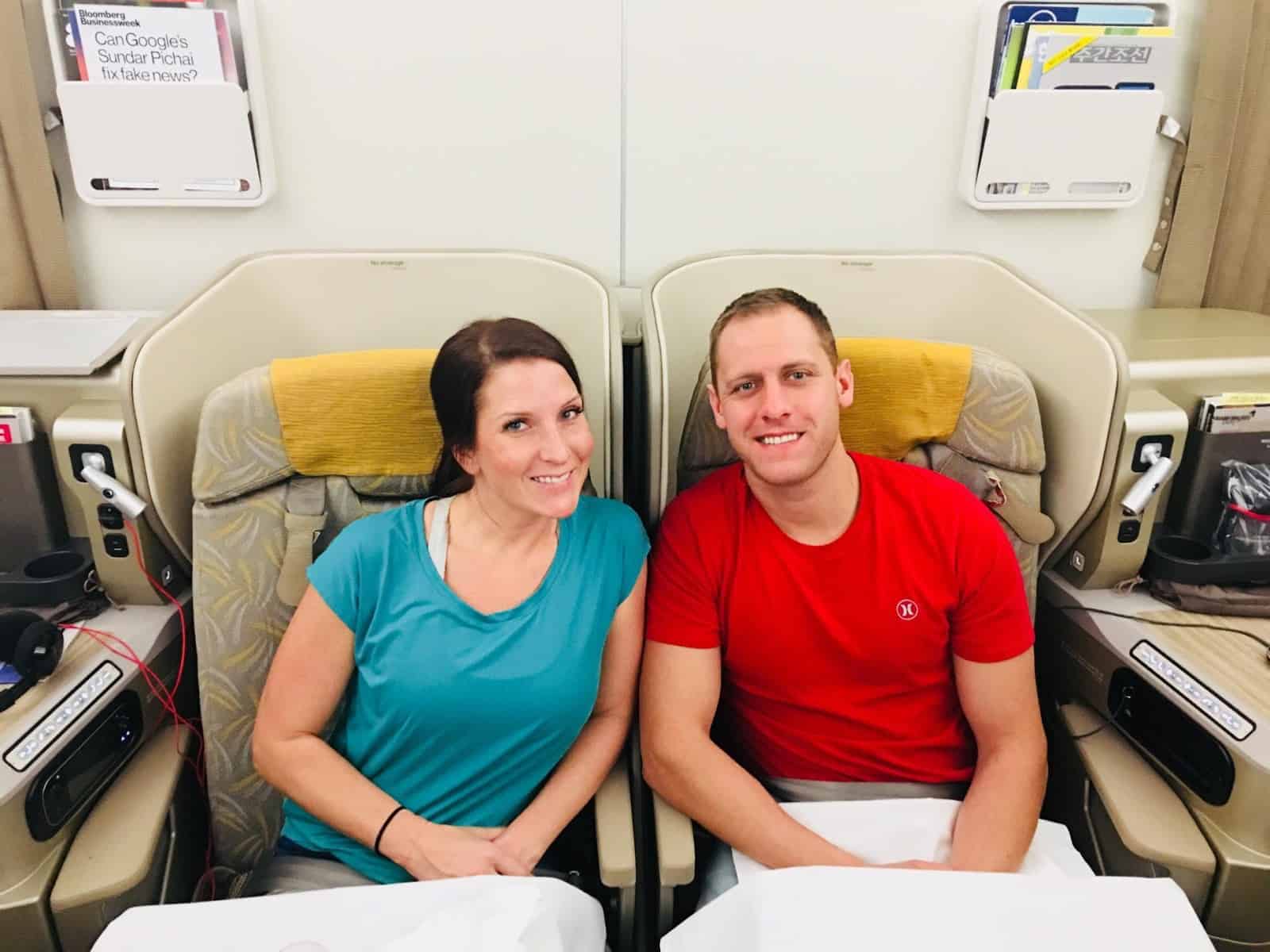 When my husband and I began discussing our home remodel plans, I knew it would be a great time to earn some BIG points. Many 10x team members helped me along the way, but Bryce and Spencer definitely got majority of my questions and held my hand as I figured out the game.

Thanks to them, I was able to plan a 19 day trip to Thailand, Cambodia, and Vietnam for my husband’s very first trip outside of North America!

I didn’t have a full game plan for our trip before I signed up for cards, so I basically got the recommended cards from the 10xTravel monthly list in order as I went along. Once it was time to book flights, I took Bryce’s advice and found business class award space from Tampa (TPA) to Hanoi (HAN) in Vietnam on Asiana Airlines via United MileagePlus miles.

We used 160,000 Ultimate Rewards points accrued from the Chase United MileagePlus Explorer Card, Chase Sapphire Preferred, Chase Sapphire Reserve® and paid $28.80 out of pocket total.  Here is a screenshot of what our flights would have cost (each) without points. 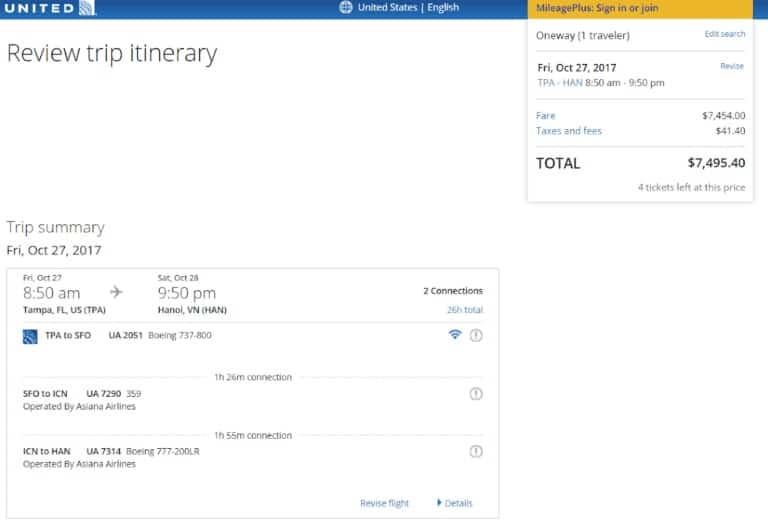 $14,990.80 worth of business class flights for $28.80. That was the most exciting purchase I had made in a long time…maybe ever! The service and food on Asiana Airlines was amazing, I would be happy to fly with them again. 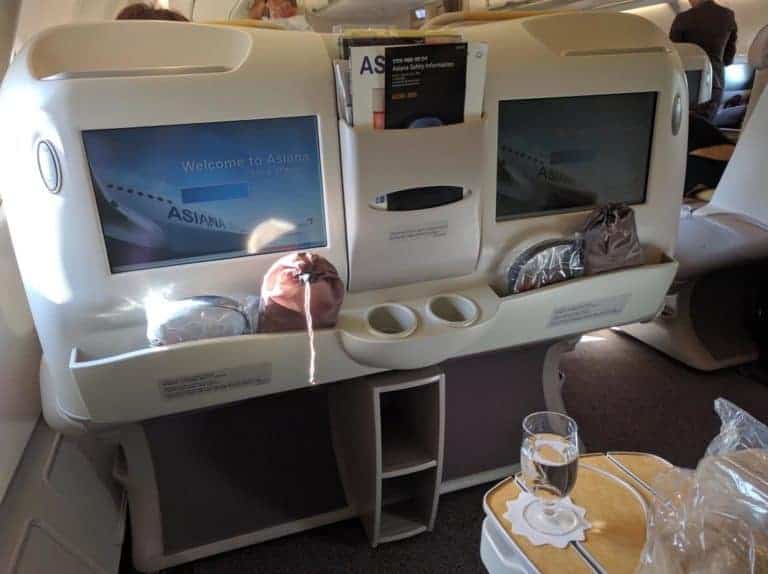 Hanoi is a really cool city to experience. The traffic is intense, almost as if you’re living within a game of Frogger as you try to cross the street. We quickly learned that the best thing to do is to cross the street at a steady pace and don’t even look at the vehicles coming at you or you might hesitate out of the natural desire to live, and it’s the hesitation that would cause you to get hit! It was so entertaining to watch that we spent a few hours drinking and eating on the balcony of a 3rd floor restaurant just watching the traffic.

We decided to take a two-night cruise in Ha Long Bay from Hanoi, and we are so happy we did. This was going to be an out of pocket expense, but luckily we had built up a good spending cushion by getting a few particular cards.

We each opened the Barclaycard Arrival Plus earning 50,000 miles each which was equal to $1000 in travel. Additionally, we opened a Capital One Venture Card with 40,000-mile sign-up bonus worth $400 and the Bank of America Business Advantage card giving us $200 as sign-up bonus.

Editor’s note: The Barclays Arrival Premier has replaced the Arrival Plus.

All of these cards have $0 annual fee the first year, so we got $1600 worth of spending money for free after hitting the minimum spend requirements. The cruise used up $258.00 of that and it included meals, a kayaking trip amongst the limestones and a spring roll cooking class. The views were incredible, photos just don’t do it justice. 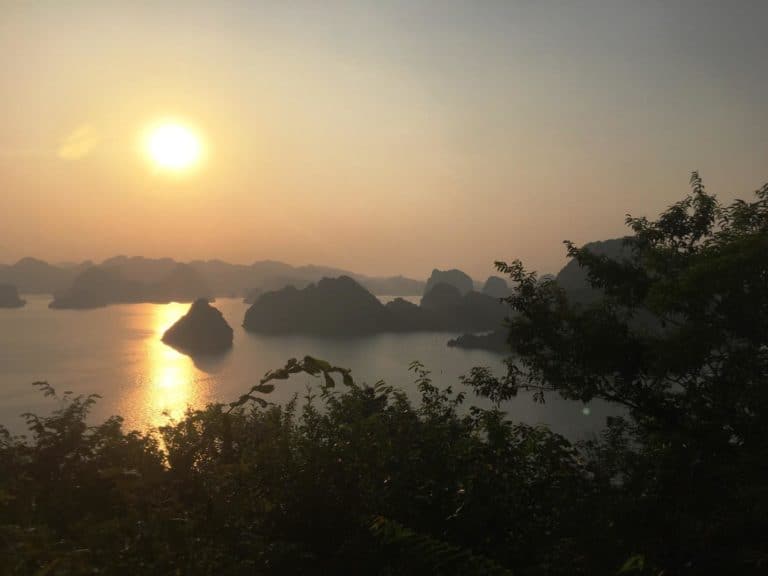 From Hanoi, we flew to Chiang Mai (CNX) in Thailand on Air Asia, both flights cost $255.00. We spent the first 2 nights in Chiang Dao which was about 1.5 hours north of Chiang Mai, nestled between 2 National Parks. This was very rural, and we chose to book our stay through AirBnB, which cost us $67.90 and was worth so much more. The home we stayed in had some breathtaking views from our bedroom balcony and allowed us to rent a scooter to check out the area. This was one of our favorite locations. 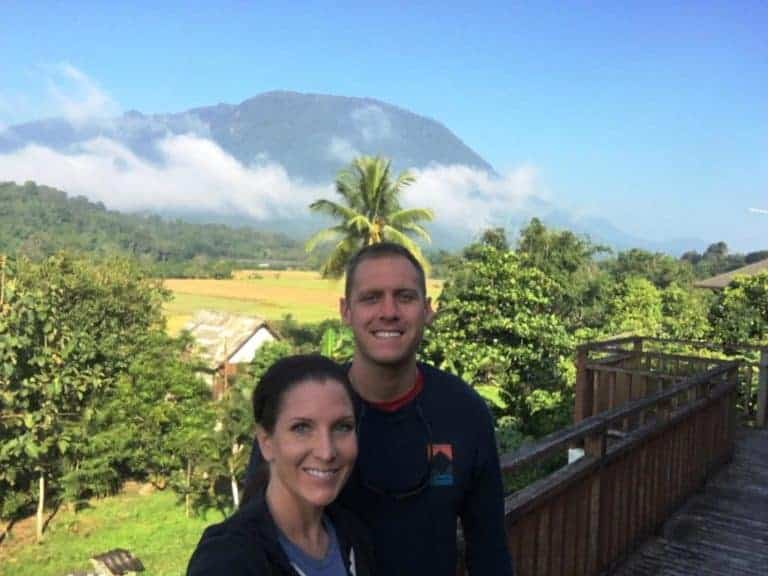 From there we spent 4 nights at Le Meridian Chiang Mai. Out of pocket cost would have been $613.84, but we spent 28,000 SPG points instead after thanks to our Starwood Preferred Guest cards from Amex!   4 nights here included celebrating Loi Krathong and Yi Peng, as well as visiting an elephant sanctuary and wandering this really cool city.

We were fortunate to get an upgrade to a Mountain View room was a really nice surprise!  Here’s our Elephant buddy, Boonyung, smiling while he took a selfie ☺ 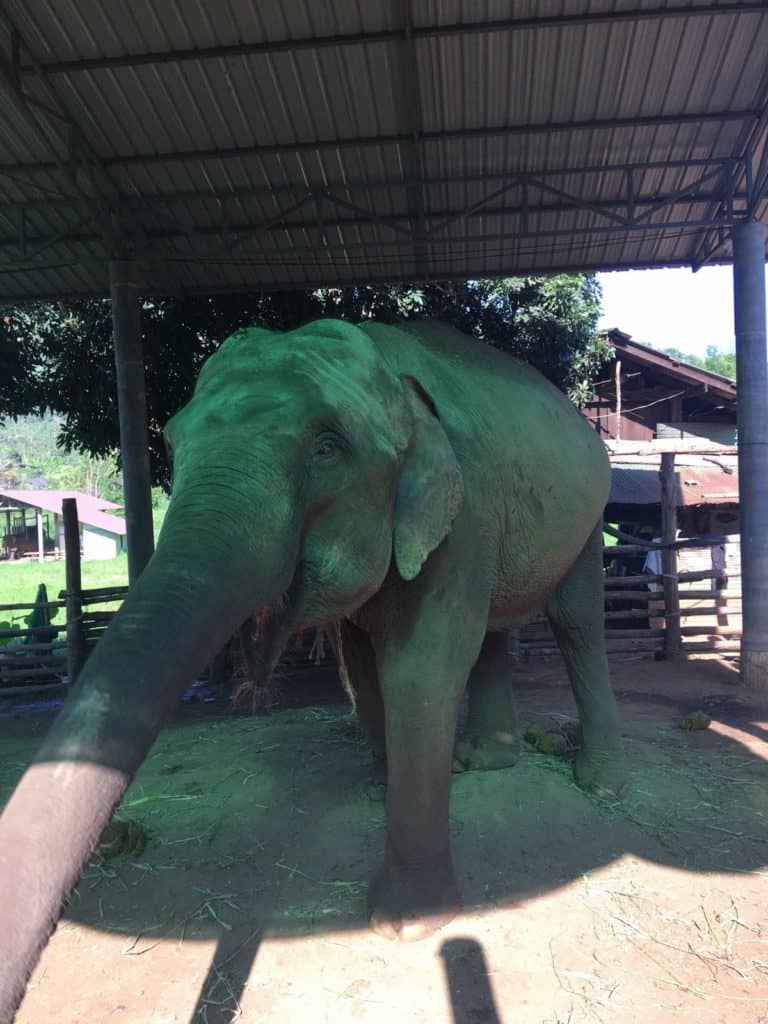 From Chiang Mai we set off for Siem Reap (REP) in Cambodia.  We decided to stay at another rural AirBnB property, but this one was at an after school program that was funded by volunteers and visitors.  The flight on Air Asia was $218, AirBnB was $56.08 and both purchases were erased thanks to our fixed-value points. We were able to enjoy Angkor Wat, Pub Street, and Jeremy even played a little soccer with the kids at the school. This AirBnB came with our own personal Tuk-Tuk driver arranged by the owner of the school. 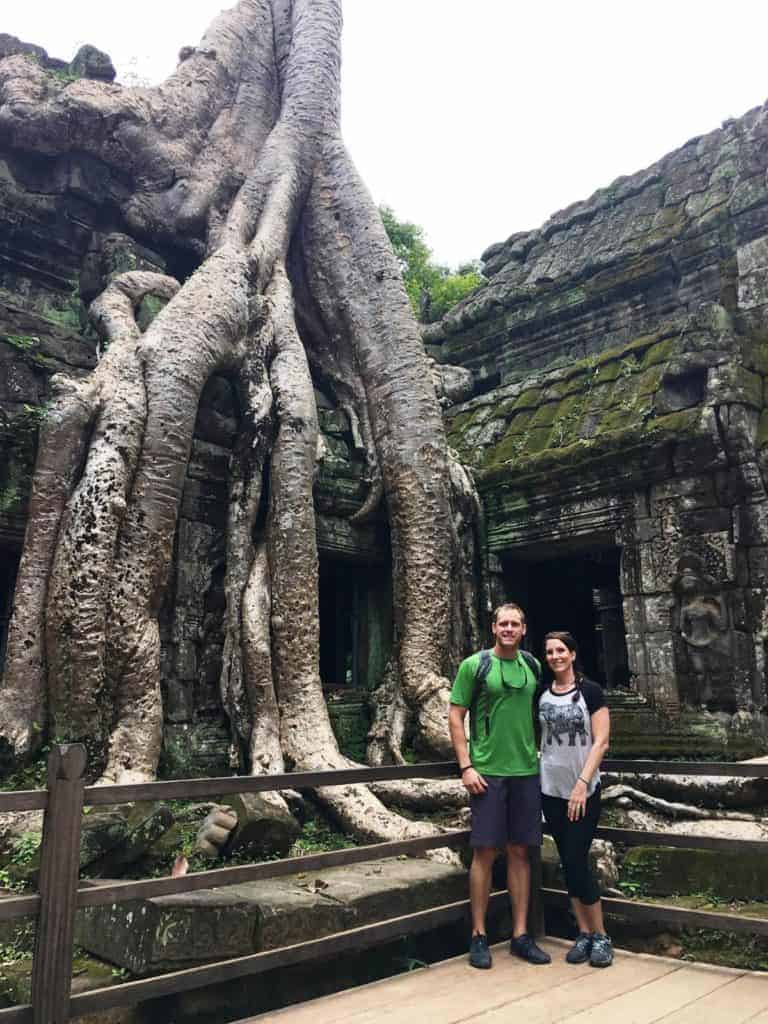 From Siem Reap we went to Krabi, Thailand on another Air Asia flight wich cost $233. We stayed at the Holiday Inn Express Krabi Ao Nang Beach for 3 nights, just across the street from the beach. Instead of spending $289.26, we spent 60,000 points earned from the Chase IHG Rewards Club Card. We did some hiking and took a rock climbing tour.  As I was about 40,000 feet up, a group of wild monkeys decided to cross all around me… I won’t lie, I was a little scared they may not like me there… 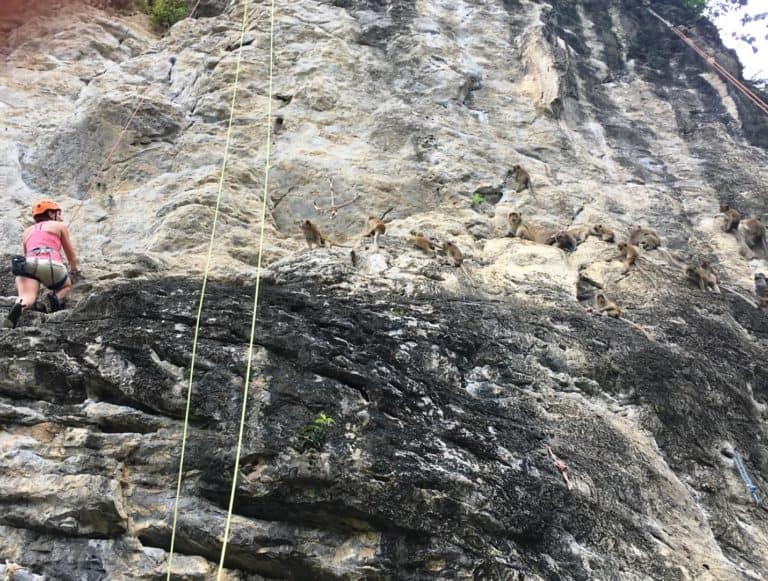 We finished our trip in Phuket before flying home. We took the ferry from Krabi, and stayed one night at The Hilton Phuket Arcadia Resort & Spa which had a cash rate of $131.08 which we booked for 26,000 Hilton points. We met up with 10xTravel contributor Julie, who happened to be in the area at the same time. Sadly, we didn’t snap a meet’n’greet photo.

From Phuket we had to get to Abu Dhabi (AUH) to catch our flight on Etihad in the Apartments. I was able to book 2 flights on Etihad for 56,000 Membership Rewards points and $148.12 in taxes and fees. These points were earned from the Business Platinum Card from American Express, which had 100,000-pont sign-up bonus at the time. These flights had a cash value of $965.18.

So, we landed in Abu Dhabi at midnight, and our flight to JFK didn’t leave until 10am. However, with tickets in the Apartments we had access to their First Class Lounge at the airport, which was an experience in itself. The food was fantastic, I got a free 20 min foot massage (much needed after walking around Asia the last 19 days), the bar selection was impressive and we had a cool place to relax while we waited. 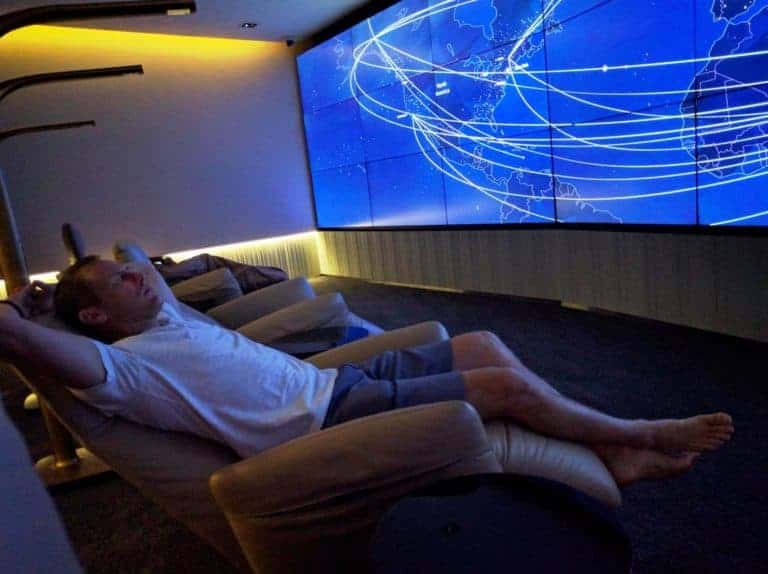 Although the flight home meant our trip was ending, I was so excited to experience the Etihad Apartments.  It took up quite a few points for both of us to fly home this way, but well worth the “expense” of 230,000 American AAdvantage miles.

We acquired the necessary miles with from the Citi AAdvantage Platinum Select, Citi AAdvantage Business Platinum Select, the Chase Marriott Rewards Premier card, and our SPG Starpoints. We also spent $70 to buy the last few SPG Starpoints we needed to transfer.  Including the $70 worth of points purchased, we paid a whopping $166 for this flight. Here’s a screenshot of what the cash rate for our flight: 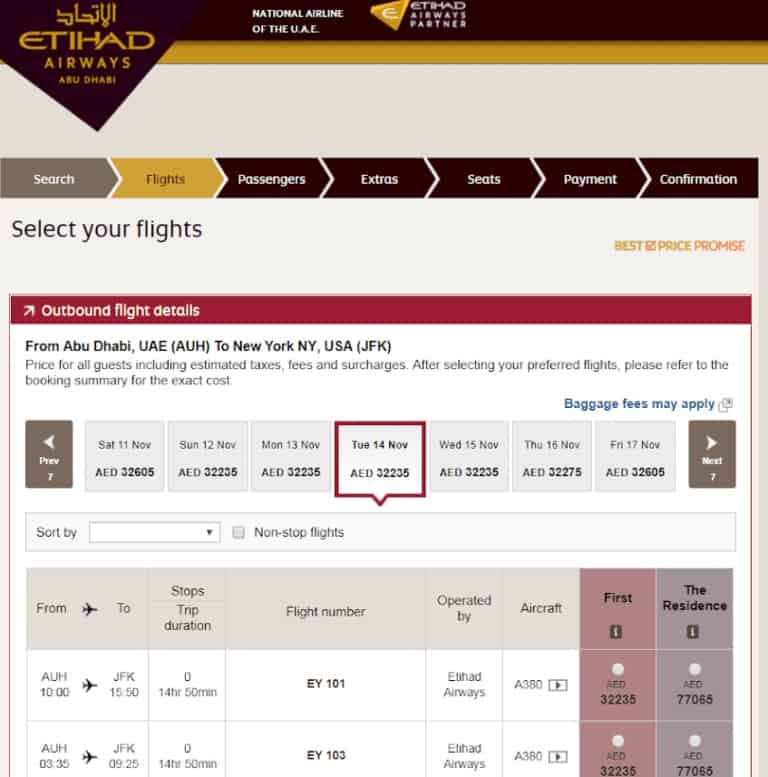 That’s equal to $17,552.28 for the both of us! After being shown to our seats, we met the chef who would be taking our orders throughout the flight and provide menus.  We were able to score adjoining Apartments so that when we lowered our divider, our beds connected. Unfortunately, we didn’t take any fantastic photos of our seats, but this is the best one showing what they looked like. 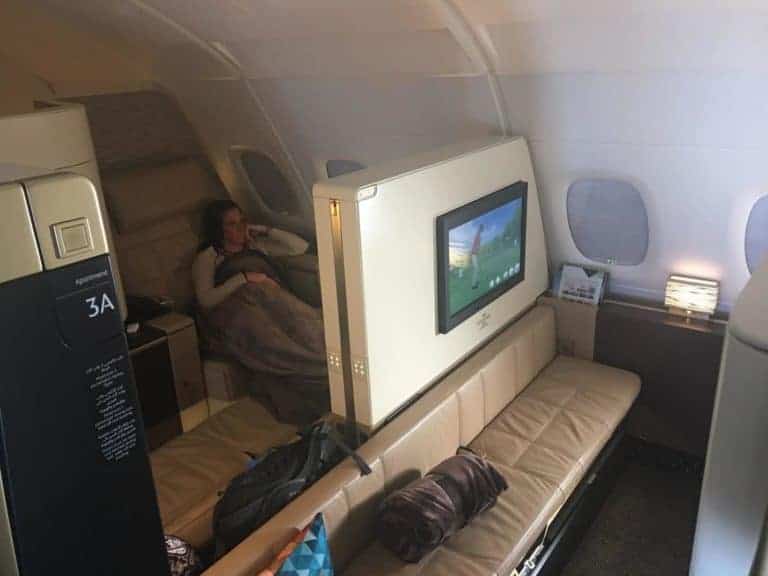 We ate and drank way more than we needed to, taking turns sharing meals in each Apartment.  Our final meal was spent in Jeremy’s Apartment shortly before we landed in JFK. 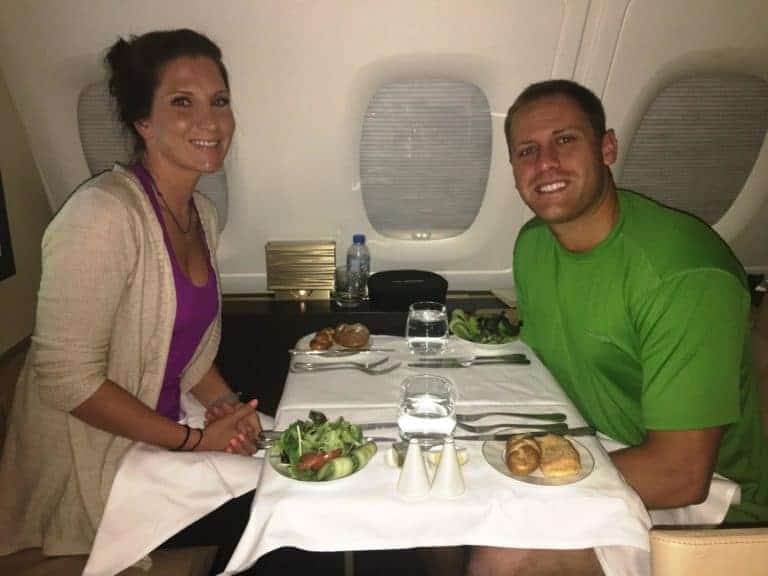 Our last leg home from JFK to TPA was booked with points from the Premier Rewards Gold Card from American Express.  We flew Delta and used 20,000 points and paid $11.20 in taxes. Cash price would have been $312.40.

We used our Chase Sapphire Reserve® card when we could during the trip to earn the extra points (of course) but had opened a Charles Schwab Checking Account since all the ATM fees would be refunded.

Learning how to use miles and points allowed us to travel in a way we NEVER could have afforded and have the trip of a lifetime. The lounge access we had during  our layovers with our Priority Pass Select membership from the Chase Sapphire Reserve® was a HUGE benefit that deserves a mention as well.

A big thank you to Bryce, Spencer, Julie, and everyone else that helped in the 10xTravel Insider’s Facebook group!